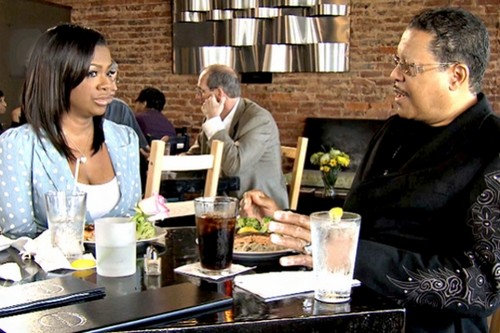 On the last episode after a tumultuous engagement, Kandi and Todd had finally picked a wedding date…and it was only five weeks away! As Kandi rallied her team to help plan a “Coming to America” themed wedding, the troops expressed doubts about pulling off such an extravagant wedding in so little time. Meanwhile, Momma Joyce met with her sisters who tried to convince her to let go of her issues and support her daughter’s decision to marry Todd.  Did you watch last week’s episode?  If you missed it we have a full and detailed recap, right here for you.

On tonight’s episode Kandi’s wedding planning team recovers from Carmon’s emotional exit, but it’s not clear if Kandi and Todd can recover from Momma Joyce referring to Todd’s deceased father as a “pimp.” Kandi meets with her father and asks him to officiate her wedding, but gets more than she bargained for when he dredges up family issues from the past. In an emotional sit down with Momma Joyce, will Todd be able to stand up for himself?

Tonight is going to be a fun episode of Kandi’s Wedding for sure and you’re not going to want to miss a minute. Tune in at 8Pm EST on Bravo and we’ll be recapping it right here for you but in the meantime, hit up the comments and let us know your thoughts on the new Spinoff?

Kandi’s “Coming to America” themed wedding isn’t getting pulled together – it’s being ripped apart. She’s down one planner (Carmon) and she still doesn’t have a venue in the four weeks leading to the wedding. Yet her team wants to send out the “save the date” cards on the hope they’ll have a place by the end of today.

As for the rest of the wedding, it’s slowly coming along. And that’s thanks to Johnny. After Todd gave him and Carmon a stern talking to last week – he went home and got his act together. So now he’s got the animals for the wedding and her other assistant arranged a dance try-out for the opening ceremony to Kandi’s wedding.

The African dance is going to be carried out by a large group of people and Kandi wanted to make the final choice herself although she did have her crew and her daughter, Riley, there to help. But, if we’re being honest, her wedding is being treated like a production. A very rushed and somewhat flawed production.

Kandi has pretty much left everything to the last minute. That includes her asking her friend to sing at the wedding and Todd asking Apollo to be his best man barely three weeks to the wedding. Only recently, Kandi finally sat down to the lunch with her dad to talk and once they were done – he agreed to officiate the wedding. Though their talk opened up some old wounds of hers.

Growing up, Kandi’s dad played a sporadic part in her life and because she only ever heard her mother’s version Kandi didn’t know how her dad felt isolated. According to him, Mam Joyce changed the locks on him one day and even took out a restraining order against him. That and her sisters’ constant interferences was the reason he claims he wasn’t more involved in Kandi’s life.

And Kandi could see how Mama Joyce pushed her father away. Her mom is abrasive to say the least and that’s why it’s going to be hard to get her mom to agree to walk her down the aisle. Mama Joyce has made her feelings on Todd and his family very clear – she thinks they’re users! Though on a harsher note she also considers Todd’s parents as a former pimp and prostitute.

Kandi found a venue albeit it looks like a lot work. It’s a warehouse meant for probably a club type party, but only the assistants can see the pitfalls. Kandi however remains optimistic. She knows her team has handled such tasks before and has every confidence that they’ll rise to the occasion again.

Todd was a little nervous about the location too and yet Kandi found a way to take his mind off of it. She told him what her mother said about his father. And, naturally, Todd is furious. He claims to have had enough and told Kandi what she should do with her mom. But all Kandi heard was “should”. She completely disregards “the why” behind Todd feeling this way. So she told him not to say anything bad about her mom.

Todd went on to have a final fitting and in the middle of it he spotted his father-in-law. He never got the chance to talk much to the other man until now and so he used this opportunity to ask him about moving forward despite what Mama Joyce has said and done. The Pastor must have some experience in this area and he sat down with his soon to be son-in-law to tell him that he doesn’t have to do anything – Joyce is hurting herself with these actions.

Joyce likes contention even when she knows better. She tried to get a black dress to wear to the wedding because she said it felt like a funeral anyway. And the first thing she asked when she saw a picture of the venue was “who’s paying for it?”

So no wonder Todd decided to confront her. He tried to tell her how much her bad mouthing his dead father hurt and found out that she was completely unsympathetic to his side. Kandi was right – there is no reasoning with Mam Joyce.