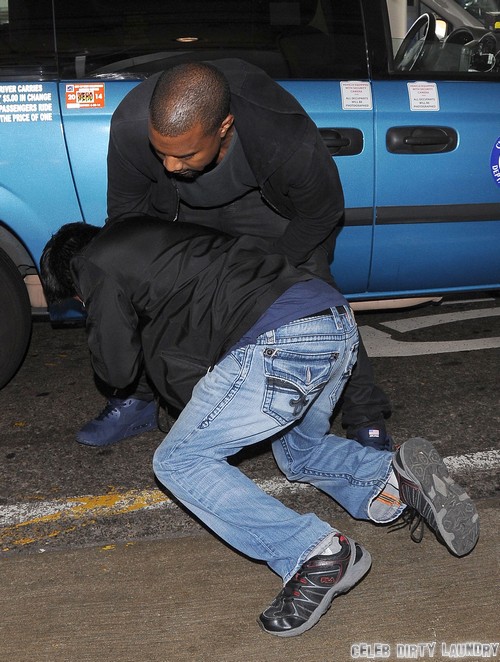 It’s not looking good for reality star Kim Kardashian’s rapping baby-daddy Kanye West right now. Not only did he physically assault an eighteen year old kid, he didn’t even do it in the heat of the moment. West stalked his prey, tracked him into a chiropractor’s office, and then allegedly pummeled him with over 30 blows – according to what an eyewitness told TMZ, “the 18-year-old was sitting in a chair as Kanye made a beeline for him and, without saying a word, started slugging him in the face. The kid was covering his face but Kanye was unrelenting. Kim just stood there and silently watched the beating.”

The only thing that could be worse was if the teenager was mentally unstable, and unaware of the severity of the racial slurs he spat at Kim Kardashian. Well…that may just be the case.

TMZ has released video footage of Kim entering the building, along with the teenager that supposedly threatened to kill her, and bombarded her with racial slurs. In the video the eighteen year old doesn’t look a day over fifteen, and he doesn’t act it either. I also should mention he doesn’t look like he weighs any more than Kim herself. Not only does he literally skip up the stairs, he hops up and down like five year old on Christmas morning while Kim enters the office ahead of him. The entire time Kim was making her way across the parking lot you could hear the teenage boy rambling, and frankly not making much sense. If the teenager did say the things to Kardashian that she claims he said, there is no reason she should have felt threatened enough by him that she had to go get Kanye to beat him up. Judging from the way Kanye’s victim was acting in TMZ’s video he was either not all there mentally, or had stopped at Justin Bieber’s house and popped some Molly with Lil Za on his way to the chiropractor’s office.

TMZ’s video of Kanye’s bizarre victim also put some holes in Kardashian’s story. When the Kanye West assault story first broke, witnesses claimed that Kardashian was screaming that she had the victim’s verbal assault on tape. In TMZ’s video Kardashian and Kanye’s victim both entered the backdoor of the office, and the door closed behind them. When the door closed they still appeared to be on good terms and no racial slurs or death threats had been spat at her. So, who exactly had the victim’s racial slurs on tape? Unless Kardashian wears a wire on her body to the chiropractor, I don’t see how anyone could have recorded their conversation. Don’t you think if there was video of the teenager threatening to kill Kardashian it would have surfaced by now?

Not only did Kanye assault a small teenager that didn’t seem to be in the right frame of mind when he allegedly called Kim a “n—-r lover”, no one seems to have any video proof that he did say any of those things.