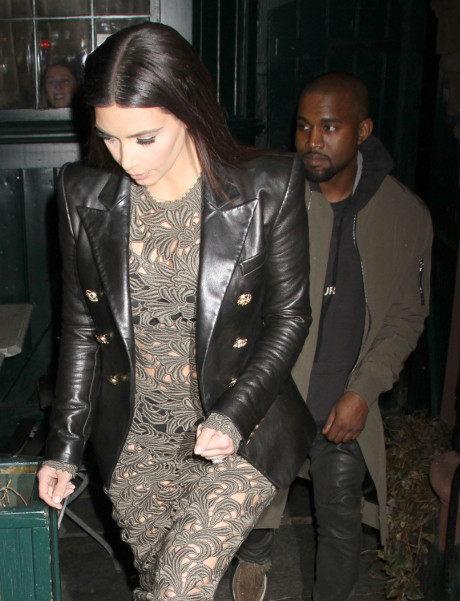 Kanye West has just hit a new low. Is he so completely insecure in his love life and so desperate for the love of his fianceé Kim Kardashian that he would put his career on the line by participating in what has to be one of the most embarrassing songs ever made? The answer is a resounding YES! Kanye has collaborated on a song with rapper Future called “I Won.”

Kanye has lost all sense of pride and actually calls out the fact that Kim has dated NFL and NBA players but boldly announces he is the “winner.” How embarrassing. So, Kanye, after your fiancé has done her share of dating through the NFL and NBA, you are the one she ends up with after they’re all done? How nice for you, though I wouldn’t exactly claim that you won anything other than a large bill from the doctor who inflates Kim’s ass with injectables. You have lost something far more important…your dignity!

Kanye THEN goes on to do more ass kissing (well, there is A LOT of ass to kiss) by including Kim’s family in the song as well! Let us give you some of the humiliating lyrics Kanye spits in this song:

“You the number one trophy wife
So it’s only right to live the trophy life
You grew up on J. Lo, Timberlands by Manolo now
Till one day I put an angel in your ultra sound
I want to dip that ass in gold, I want to dip that ass in gold
I made it over NBA, NFL players
So every time I score it’s like the Super Bowl
Baby, we should hit the south of France
So you could run around without them pants
I put that glacier on your little hand
Now that’s the only thing without a tan
My trophy on that Bound bike, I gave you only pipe
If people don’t hate then it won’t be right
You could look at Kylie, Kendall, Kourtney and Khloe
All your Mama ever made was trophies, right?”

So, it is official that Kanye has lost all credibility as a rapper as he desperately tries to deflect from the fact that he was not the first choice of his fiancé. Kim only ended up with Kanye after having been around the block…and around the courts…and around the fields…and around the wedding cakes!

There really weren’t many sports left that she hadn’t already tried. Once Kim knew the options were drying out, she attached herself to Kanye for all the wrong reasons. And if you don’t believe that, consider how Kanye has taken on this desperate, lovesick persona where he is continually doing anything in his power to lock in Kim as his wife. From the music to getting her on the cover of Vogue, he is so insecure about their relationship he is resorting to the most desperate of measures.

However, Kanye, given your fianceé has had her fair share of men, and only now ended up with you out of lack of anyone better, I hardly think your “I am the victorious one” take on Kim’s choices are winning you any believers. We have all faced the fact that you were nowhere near Kim’s first choice and think it’s time you faced that harsh reality yourself before embarrassing yourself any further with your pathetic and desperate attempts for her love and attention.