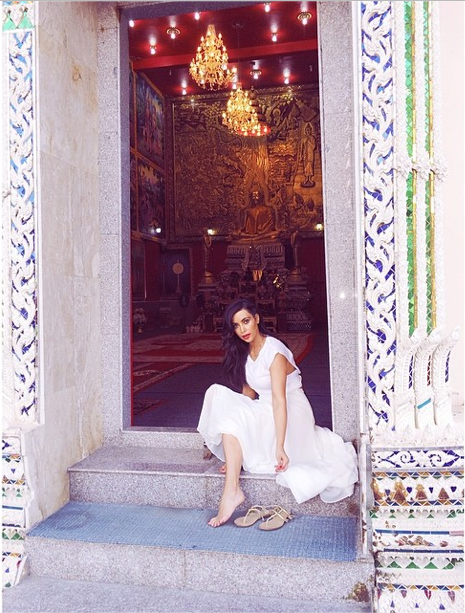 The Kardashians and Jenners are at it again: sexy pics via Instagram. This time, Kim Kardashian, Khloe Kardashian, Kendall Jenner, Kylie Jenner, alongside their mother Kris Jenner, are changing things up. Instead of their usual L.A. backdrop setting the stage for their famous snaps, the family is sending us pics all the way from their vacay in Thailand. While there, they’re also filming for their reality show Keeping up with the Kardashians. Their pictures are mixing culture with all that Kardashian Klass, and we’d encourage you to check out the pictures in the gallery below!

As Us Weekly reports, “On Sunday, March 30, the reality stars had a beach day at Phang-Nga Beach in Phuket, Thailand where Kim Kardashian showed off her impressive bikini body in a grey two-piece suit with a cerulean blue cover up.”

But Kim wasn’t the only one caught flaunting a bikini. Khloe was sighted sporting a killer one piece with a sailor’s cap. Bruce and his two sons were also sighted on the trip (however, they weren’t in bikinis). It seems as if he and his sons are still filming portions of the show . . . but we’ll see how much longer all that lasts.

Kim also posted a couple photos of her visiting temples, one of which depicts her sitting out front removing her shoes — captioned with the following hashtag: “#etiquette.” Her temple photos were also labeled with “#blessed” and “#enlightenment.”  Oh, sweetie, I feel like you’re going to have to work a lot harder to find enlightenment; not sure if taking an Instagram selfie (while filming a reality TV show for E!) outside a holy temple constitutes itself as enlightenment. But, what do I know?