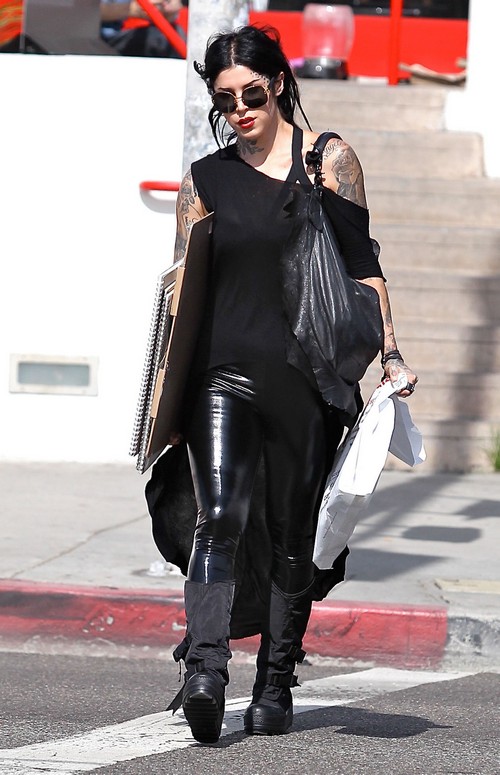 Talk about a backhanded compliment. Kat Von D took to Twitter to express her hatred for the famous reality TV stars, Kim, Khloe and Kourtney Kardashian, the Kardashians. She wrote “Sure, people being “famous” for no reason other than surface qualities is silly. But subscribers are sillier.” The backhanded can be explained this way – part of her comment does tell the Kardashians that they are indeed pretty to look at while Kat then implies that’s all they have going for them. Sorry, but she’s wrong! I don’t even like those Armenian Barbies and I can still see how far they’ve come in their professional lives. Everything else like relationships turns out to be crap for them yet that never stopped them from making money.

In another tweet she wrote “I really do hate that I know who the kardashians are.” You mean the Kardashians that have built a fashion empire while she was busy hooking up with Jesse James. I really hate the world with men like him in it but I’ve never judged her for nearly marrying him. Kat needs to hold off on who she’s throwing shade at. She’s got way too many skeletons in her closet to suddenly be standing on a high “moral” ground.

All of this “hating” (that is what it sounds like) makes Kat Von D seem like a joke. Did she forget that used to have her own reality show? Maybe its hard to remember anything other than the cancellation. You would think she wouldn’t call the Kardashians out for their publicity stunt of a life. Here’s a woman that constantly got into arguments and pretended to be this hardcore badass simply for for TV. She created so much drama for ratings and now she wants to do what; degrade her former number one competition. Oh my bad, I had forgotten she and the family are still competing. In case you haven’t heard because really why would you – Kat launched an international clothing line in late 2011. If you’re having trouble recalling then you don’t feel bad. Kim Kardashian’s divorce from Kris Humphries had really taken up the news.

She doesn’t have to like the Kardashians. Many don’t and that is a fact, but she really should stay in her lane. We all know the real reason behind her “attacks”! The green-eyed monster.