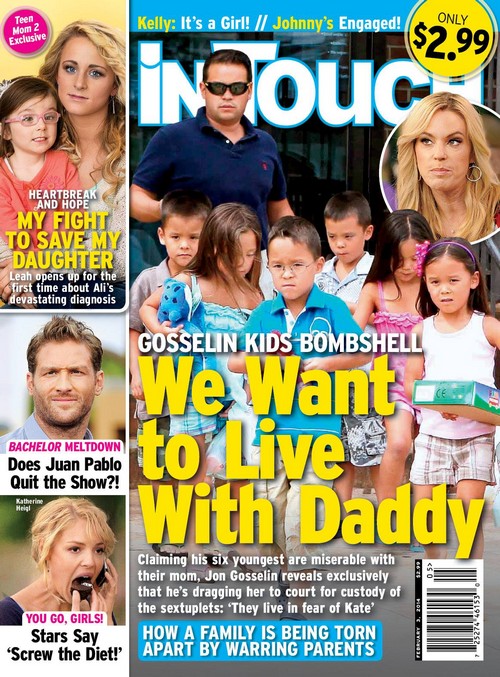 Jon Gosselin doesn’t give up easily, you gotta give him that. Despite Kate Gosselin‘s increasingly desperate attempts to combat his accusations with People Magazine covers and Today Show interviews, Jon is continuing to give ‘exclusive’ after exclusive to In Touch Weekly. Granted, I don’t know how much of an exclusive it is when nobody else wants to listen to Jon, but hey, at least he’s getting some media coverage?

In the latest cover issue of In Touch Weekly, Jon is now claiming that his youngest six children are ‘miserable’ with their mom and want to live with him. Obviously, it’s too late for him to pretend that Mady and Cara Gosselin also want to live with him, since they’ve pretty much admitted that they don’t think much of their father. So now his solution is to pretend as though the youngest six kids are terrified of Kate.

Jon tells In Touch that he’s going to ‘drag‘ Kate to court over custody over the youngest six kids, since they live ‘in fear of Kate‘. Good grief, can this man get any more dramatic? It seems like every interview he gives, he just gets more and more melodramatic. Let’s be real – if he really wanted custody of his kids, he would have fought for a it a long time ago. The only reason he’s bringing any of this up right now is because he’s broke and he needs the media coverage to earn some money. Otherwise, he would be off partying with models in yachts, just like he used to do before he blew all his reality TV money.

In Touch also has a feature on how actresses in Hollywood are starting to diet less and less, perhaps led by Jennifer Lawrence‘s strong stance on the subject.

And finally, will Juan Pablo quit the Bachelor after the drama that’s been going on in the show? We’ll have to wait to find out, but with the amount of money on the line, I highly doubt that’s an option for him.