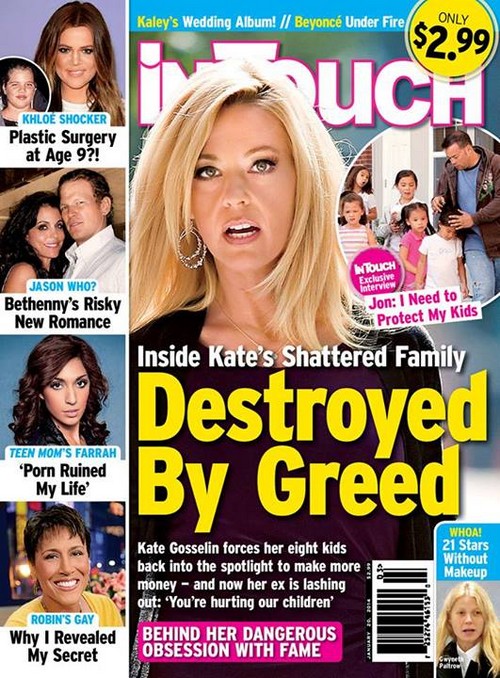 Well, look what we have here. A little birdie decided to talk to In Touch Weekly, didn’t he? The latest cover issue of In Touch Weekly is focused purely on bashing Kate Gosselin and defending Jon Gosselin, making Kate look like a terrible mother and Jon look like a protective father. I can’t say whether that’s the truth or not [in honesty, they both seem like terrible parents], but obviously In Touch will side when Jon when he’s the one giving them the exclusive interview.

Anyway, the cover report claims that Kate’s ‘shattered family’ has been destroyed by greed, namely Kate’s greed. Due to her ‘dangerous obsession with fame‘, Kate has forced her eight children back into the spotlight to keep herself more relevant and make money, and that has apparently caused Jon Gosselin endless amounts of worry about his children’s future.

In his exclusive interview with In Touch, Jon claims that Kate was harming his children, and that he needed to protect them from her. Well, it’s a little too late for that now, isn’t it? Jon’s the one who decided to jet around the world, spending money and acting like a douche while Kate was single-handedly raising their eight kids. Sure, she definitely famewhores the kids for money and attention, but at least she takes care of them. They’re ostensibly happy and healthy children, and even if they’re being used, Jon gave up that right to complain when he decided that partying was a higher priority than raising his kids. Of course, now that he’s lost everything, including his marriage, his fame, and his money, he’ll do anything to get that back – and that includes pretending that he actually cares about protecting his children from fame.

What do you guys think about this week’s cover stories? Let us know your thoughts in the comments.