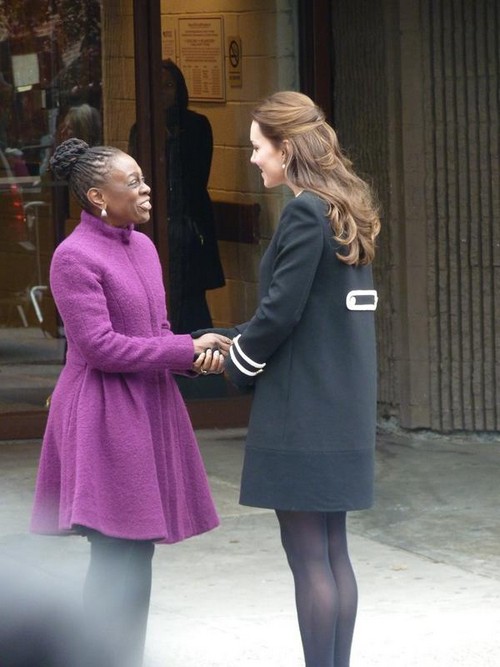 Kate Middleton and Prince William have touched down in NYC, but if we’re being honest, all the focus has been on Kate Middleton and her baby bump. Nobody really cares what Prince William does, apart from the hardcore royal watchers. However, Kate’s second pregnancy, the sex of her second child, the absence of Prince George, and Kate’s general state of being has generated a lot of interest in the US – after all, there’s nothing America loves more than celebrity [royal] motherhood.

Kate Middleton and Prince William actually landed in NYC last night, and almost immediately had to attend a private dinner hosted by British ad exec Sir Martin Sorrell. The private fundraiser ran $50,000 a plate for anyone who wanted to wine and dine with Prince William and Kate Middleton, which is no surprise. Americans are obsessed with the British royals, and I have a feeling that we’re going to have much more gushing from news anchors, celebrities, and political officials before Kate’s and Will’s weekend is over.

Now, Kate Middleton and Prince William are traveling with an entourage of seven people, including their security detail. They were a half an hour late to JFK last night, and were immediately met on the tarmac and taken to the Carlyle hotel [arriving at 5:45 PM]. They attended the charity fundraiser an hour later after freshening up, and then proceeded to head back to the hotel after the fundraiser. Kate was also traveling with an ambulance as part of her security detail, largely because she’s five months pregnant and nobody wants to take that risk of unforeseen health complications. The Hypermesis Gravidarum [acute morning sickness] was bad enough, Kate doesn’t need to catch a foreign bug in the US and then proceed to stay home for the next three days.

After resting up back at the hotel, Prince William headed to Washington D.C. this morning to meet with President Obama and Vice President Joe Biden, and then attend the International Corruption Hunters Alliance conference at the World Bank. The organization’s goal is to prevent poaching and illegal wildlife trade, although I’m sure Prince Charles’ latest hunting headlines will make things more complicated for William.

Meanwhile, Kate Middleton has already headed to Harlem with the first lady of New York City, Chirlane McCray. They are visiting the Northside Center For Child Development in Harlem, following which Kate will attend a British Consul General of New York hosted lunch.

Of course, the royals are always more interesting together, although Kate Middleton’s baby bump has become visible enough to steal the spotlight, but not so big that it’s become the center of all headlines. Plus, all eyes will be on the royals tonight, when they reunite at the NBA Brooklyn Nets game at the Barclays Center. Photo op with Beyonce and Jay-Z? I’m already salivating at the thought of Beyonce’s inevitable side-eyes.