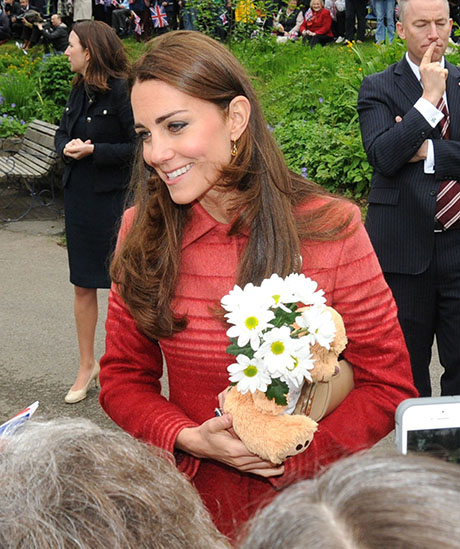 Kate Middleton‘s pregnancy status has been up in the air for a while now, with many royal enthusiasts wholeheartedly believing that their favorite princess was in fact well on her way with a second pregnancy. While this might disappoint a few (or maybe hordes of) people, it’s fair to say that Kate Middleton isn’t pregnant. You might be wondering how we know this. Well, on Thursday, Kate and Prince William took shots of whiskey while in Scotland, which basically discredited everyone’s pregnancy theories.

Obviously, if Kate were pregnant, she wouldn’t be jeopardizing the health of her child by swigging hard alcohol. As E! Online reports, “Middleton looked on as her husband tasted The Black Grouse Alpha. The Duchess was then persuaded to try the “girlie” whiskeys: two weaker blends called The Snow Grouse and The Naked Grouse, both around 40 percent proof.

“Nice,” she said. “I like them.” Moments later, William was handed a shot of 68.9 proof clear alcohol, a challenge he gladly accepted. Shaking his head, the Duke winced and remarked, “That’s pretty busy!”

What do you make of Prince William and Kate Middleton‘s Scottish adventure? I guess now it’s quite clear that Kate isn’t pregnant, which might be a good thing, being that she could use the extra time to carefully rearrange her undergarment drawer. Oh, wait . . . she doesn’t wear underwear.

Leave your thoughts in the comments section below!

Prince William and Kate Middleton visit Strathearn Community Campus in Crieff, Scotland on May 29, 2014. They are on campus to meet local groups including young carers, Scouts, Cadets and Brownies. Kate looks great in a red striped Jonathan Saunders coat, a red dress by Goat and her favorite nude L.K. Bennett heels.