Kate Middleton Flirts With One Direction Boys At The Royal Variety Show – Prince William Watches From The Sidelines! 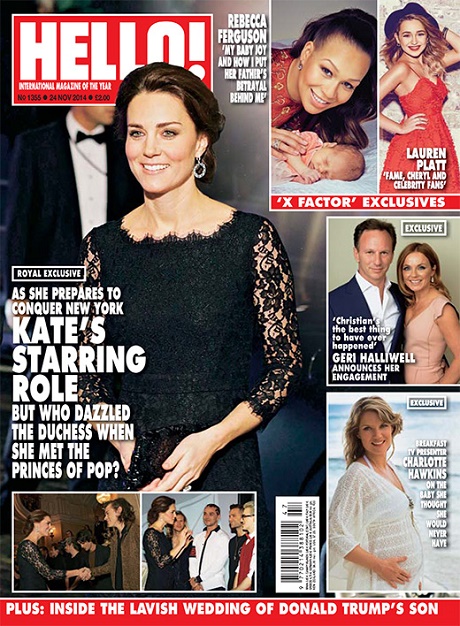 Kate Middleton is often forced to attend boring, staid royal events without a smidgen of fun or spontaneity. That’s probably one of the biggest reasons she looked so animated at the Royal Variety Show last week. Also, even though Kate was with her husband, Prince William, that didn’t stop her from flirting with several young members of One Direction.

Kate Middleton was reportedly asked about the better looking One Direction band member, and she reportedly giggled before replying. But let’s be real – it was probably Harry Styles, even if Kate was diplomatic about it. Harry reportedly told reporters, “I said congratulations on the bump. She didn’t look bumpy.”

As always, Harry Styles knows that flattery is pretty much all you need, even with the future Queen of England and mother to the royal heir. However, Kate Middleton actually does have a legitimate celebrity crush: Angelina Jolie. She admitted it after her marriage, she’s talked about it in the past, and I don’t think she’s going to switch from an Oscar-winning, humanitarian talent to a bunch of pre-pubescent teen boys – no matter how attractive they are or how giggly they make her.

Of course, maybe Kate Middleton was simply playing up their attractiveness because of her own issues with Prince William. The royal couple were rumored to be fighting for the past few weeks, and even though they’ve squashed most of the outward signs of discontent, that doesn’t mean that everything is perfect in Kate-and-Will land. If anything, I think the stress of pretending otherwise has caused even more issues between them, and the space between them gets wider and wider at every appearance.

What do you guys think? Do you think that Kate Middleton’s One Direction flirtation was harmless and hilarious, or just shy of attempted cradle robbing? Let us know your thoughts in the comments below.