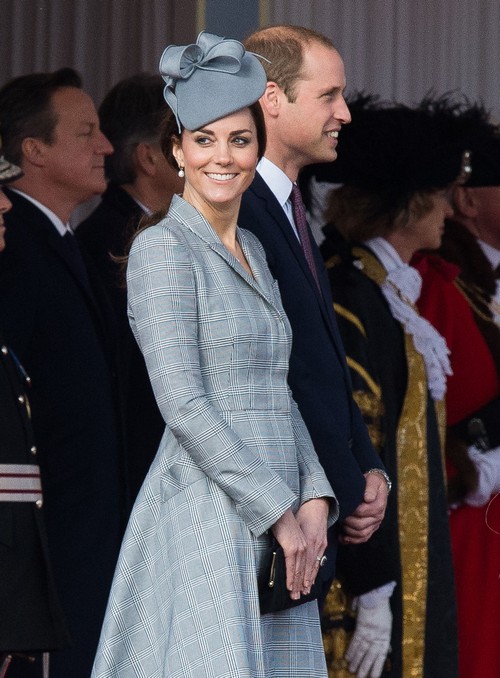 Kate Middleton’s bravery in deciding to have four children and two more pregnancies is inspiring Prince William to ask Queen Elizabeth to make him King of England before Prince Charles, according to GLOBE Magazine. Prince William shocked the Royal Family and their followers when he informed dying Queen Elizabeth he was going to pass on the crown, leaving her no choice but to hand over the royal reigns to his father Prince Charles and his ambitious wife Camilla Parker-Bowles. Queen Elizabeth had all but announced she would be bypassing Prince Charles, until Kate Middleton became brutally ill with morning sickness while pregnant with her second child. Will hated seeing his wife on bed rest and ailing from hyperemesis gravidarum, and decided he didn’t want to take over the crown, and wanted more time with his growing family so that he could keep a close eye on Kate.

However, according to the recent edition of GLOBE Magazine, Prince William and the rest of us have all seriously underestimated the Duchess of Cambridge. Not only has she completely bounced back from her extreme morning sickness, but she has revealed that after this royal baby is born – she plans to have two more by the time she turns 36. Although Prince William is reportedly concerned with Kate’s baby-making plans, he is supporting her 100%. And, Kate’s newfound strength has inspired her hubby.

Rumor has it that since Kate Middleton proved she will be just fine, and will not let the hyperemesis gravidarum slow her down – Prince William is reconsidering his rejection of the crown. Apparently now that he sees Kate Middleton can handle her nauseating pregnancy just fine, and so fine that she plans on doing it two more times in the next few years, Prince William has informed Queen Elizabeth that he does want to become the next King of England. And, as you can imagine Prince Charles and Camilla Parker-Bowles are furious. The couple was still celebrating the fact that prince William turned down the crown, and the news that he has changed his mind is literally raining on their parade. Expect the power struggle between father and son to intensify.

So, how crazy do you think it is that Kate Middleton hasn’t even given birth to her second child and is already planning her third and fourth? Do you find it admirable, or just plain insane? Will Queen Elizabeth accept Prince William’s offer to take the throne, or is he too late? How will Charles and Camilla react? Let us know what you think in the comments below!