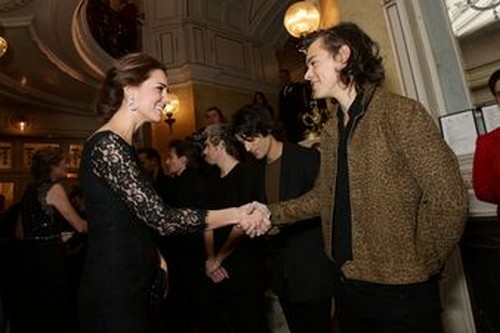 Kate Middleton wants to give birth to two more babies after her current pregnancy giving her and Prince William four children! Queen Elizabeth is delighted at the prospect of a larger royal family but Prince William is terrified at the toll another two pregnancies will take on his darling wife. Prince William’s pregnant wife Kate Middleton just recently started performing her Royal duties and taking her baby bump out for public appearances a few weeks ago. After the Palace confirmed that the Duchess of Cambridge was indeed pregnant with baby number two, Kate Middleton suffered from hyperemesis gravidarum (acute morning sickness) and was on bed rest for several weeks. This isn’t the first time the intense morning sickness has sidelined Prince William’s wife – when she was pregnant with their first child Prince George she wound up in the hospital.

This time around Kate Middleton is allegedly pregnant with a girl, so that means she and Prince William will have a son and a daughter. Considering the hell Kate goes through with morning sickness every time she gets pregnant, you would think that she and William would be content with a boy and a girl, and consider their family complete. But, according to the November 24th edition of GLOBE Magazine, Kate Middleton is determined to have four children by the time she is 36 – and she isn’t going to let her medical condition stop her.

A source close to the Royal Family informed GLOBE, “If Kate has her way she’ll be the mom of four royal babies by the time she turns 36. She is determined. She refuses to be beaten down by the crippling illness condition that has laid her low twice now. She wants two more children after this pregnancy and she will put up with vomiting and severe dehydration to complete their family.”

So, why the lucky number four and why is it worth debilitating morning sickness to get it? To please Queen Elizabeth of course, the Queen had four children and Kate desperately wants to please her and follow in her foot steps. But not if Prince William has anything to say about it. GLOBE’s inside source goes on to explain that Prince William hates to see how sick Kate becomes when she is pregnant and it breaks his heart, he is trying to talk her out of any more children after this pregnancy.