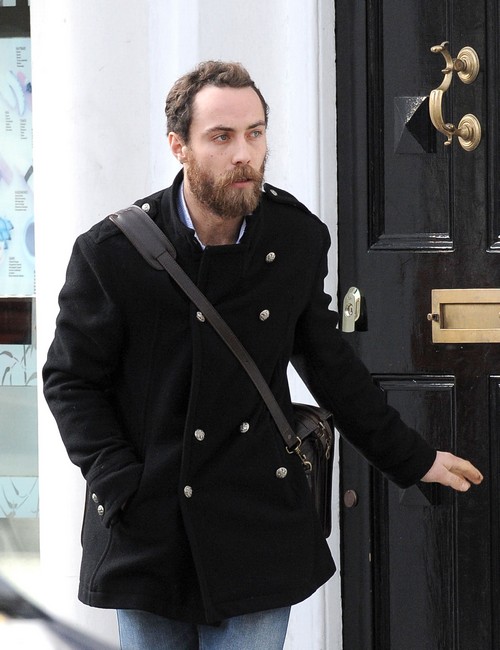 James Middleton, Kate Middleton’s younger brother, has given an extremely rare interview to ABC News about his sister’s second pregnancy and being the ‘fun’ uncle to baby Prince George.

James explained, “I still see Prince George as my nephew. I just want to be the best uncle possible. Like any uncle wants to be, I want to be the cool uncle. The fun uncle… That’s what sort of I’ll always try and be.” Hey there James, chill a minute, Prince George already has the most fun uncle in the world, Prince Harry!

Although James wouldn’t reveal the sex of the unborn royal baby [come on, we all know it’s a girl], he did mention that Kate Middleton was on the mend from her bout with Hyperemesis Gravidarum. As we all know, the Duchess was temporarily incapacitated for a few weeks due to acute morning sickness, which gave her a convenient excuse to miss all her royal engagements and public appearances. And now that she’s being forced to attend everything on double overtime, of course the royals keep bleating that she’s better. They’re not going to admit to being slave drivers, are they?

James concurred with the public consensus on Kate’s health, explaining, “She’s better. I mean, it’s not unknown that she suffered from this acute morning sickness. Fortunately she is, I think, on the mend.”

Why ‘I think’ there? Either she’s on the mend, or she isn’t. Is he trying to tell us something? Or is it just a poor choice of words? Or are the royals playing mind games with us plebeians again? I can see why James Middleton was careful about mincing his words, especially in an outlet like GMA. Kate’s pregnancy is a hot topic of discussion right now, especially in the wake of her friends leaking confirmation of baby girl Cambridge. Kate Middleton will be having a baby girl, but unfortunately for the royal family, everybody already knows this now. And of course James Middleton would have known about the leak, and of course he would have been tempted to reveal it. Then again, the royals probably threatened James with all manner of public humiliation if he leaked anything – they’re already not huge fans of his family.