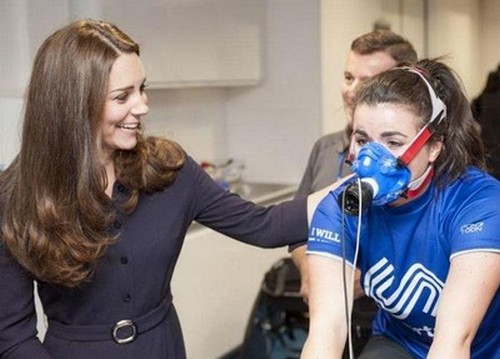 Kate Middleton is well into her second trimester, and pregnant with a baby girl according to reports and rumors, but unfortunately for her, vacation/recovery time is over. Kate Middleton’s pregnancy might have caused her a lot of health issues initially, but there’s no excuse for sitting at home and rolling about – not when there are people to meet and royal appearances to make!

Kate Middleton and Kate Middleton’s baby girl baby bump made an appearance at a SportsAid Workshop today to meet several young Olympic hopefuls, all of whom are hoping to participate in the 2020 Tokyo Games. While Kate Middleton encouraged the Olympic hopefuls she passed a mental agility test that showed The Duchess of Cambridge possesses quick reflexes and a sharp mind.

Even though Kate Middleton is trying hard not to draw any attention to her pregnancy, her baby bump is clearly starting to show. It’s not visible enough to be a fixture yet, but it’s getting there. And you know it’s infuriating the hell out of our future Queen, since she’s already proven that she’s way too self-conscious about that baby bump. Other than that, she looks the picture of glowing, robust health. There’s really no more excuses for her to go back home and rest at Bucklebury, not when she needs to return to her royal duties and Kensington Palace. If she does go back to Bucklebury at any point, then perhaps rumors of Kate fighting with Prince William weren’t blown out of proportion after all. But for now, Kate is following royal orders and schlepping about the place, making appearance after appearance. She’s making up for months of missed royal engagements, and she’s being forced to do it with a vigor.

Granted, all of these mini-appearances are probably just preparing her for the big New York trip next month, at which point Kate Middleton’s baby bump should be even more visible. And Prince George will be there! Yay, finally something exciting.