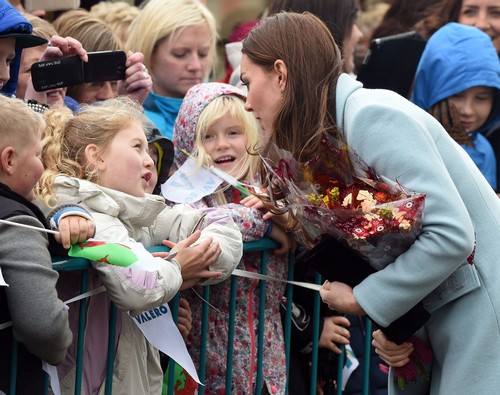 The Royal craze in the US is about to hit fever pitch, since Prince William and Kate Middleton just announced their trip to NYC in the glorious USA to unveil a charity, three years after their post-wedding trip in 2011.

Last time, the royal couple visited Los Angeles, but this time, they’ll be heading to New York City on a three-day trip next month for their new charity, United for Wildlife. They will reportedly be accompanied by their son, Prince George, and likely their entire staff, including George’s nanny.

The United for Wildfire Charity deals with wildlife poaching and protecting endangered wildlife, and a source tells the Daily Mail that both Will and Kate are very excited about hosting the unveiling ceremony in NYC. This same source adds, “Kate has never been to New York and she is really looking forward to it now that she is over her illness. Kate was upset she had to cancel her tour of Malta, but now she is over her morning sickness and really excited about America.”

At that point, Kate Middleton will be well into her second trimester of pregnancy, which means she will probably start showing a little more. However, Kate Middleton’s baby bump might not even be the sole point of discussion, especially if the royals trot out Prince George like they did for the Australia and New Zealand trip. It’s been much too long since the public’s gotten their last look at the young prince, and everyone’s eager to see how he’s grown up.

Of course, this will also serve as an opportunity for Prince William and Kate Middleton to prove that they’re not fighting, and that they’re happier than ever. Whether that’s the truth or not, I’m sure they’re under strict instructions to behave themselves and not slip up.