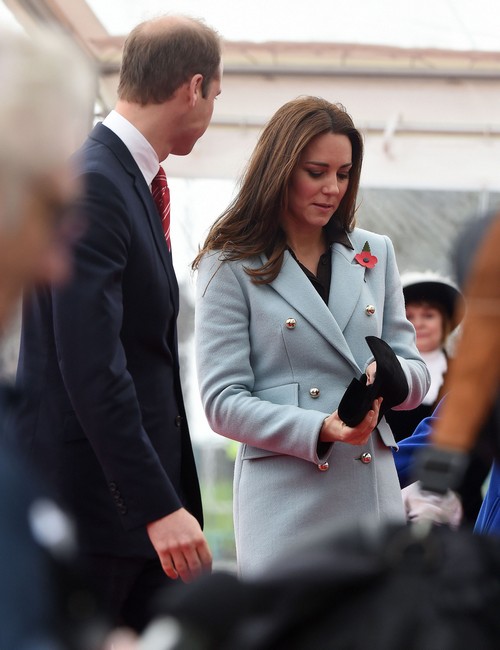 Kate Middleton and Prince William are experiencing marriage trouble according to rumors currently in the news. Kate allegedly moved out of Kensington Palace and into her mom’s home at Bucklebury after a particularly upsetting fight with her husband and remained living there for weeks, even after her morning sickness had abated. Eventually Queen Elizabeth intervened and ordered the couple on a Balmoral babymoon to sort out their differences. A look at photos of Kate and Will taken over the weekend at appearances in Wales and the Remembrance Day Parade indicate that all has yet to be settled amicably between the couple. Naturally Kate confides in sister Pippa Middleton and her mom, Carole, and now The Duchess of Cambridge is having a royal freak-out over the possibility of details of her private life becoming public. And if you think that Kate is concerned then just consider how distraught Queen Elizabeth and Prince William will be if Pippa trades on her insider’s knowledge of royal gossip to further her American TV career.

Pippa Middleton is getting that Today Show media correspondent offer, whether the royals want it to happen or not. Pippa’s a huge boon to any US network smart enough to win her over, and NBC realized that before anyone else. And no, she’s not a boon because of her *brilliant* media correspondent or writing skills, but rather because of her close connection to the British monarchy and its famous royals. Kate Middleton, Prince William, and Prince Harry are undoubtedly the three most valuable royals in terms of gossip to an American audience – followed closely by Prince George – and they have an almost cult-like following with the public.

By offering Pippa Middleton a job, NBC is capitalizing on that following, realizing that wherever Pippa goes, many of these fans will follow. Not because they care about Pippa, mind you. No, it’s because they think that Pippa can provide some sort of dirt on Kate, even if she refuses to do so. Plus, NBC is all about ratings, and whether you love Pippa Middleton or love to hate Pippa Middleton, there’s no denying that she brings in ratings.

Now, even though Pippa is being a hired a lifestyle correspondent job, I don’t think NBC really cares about what exactly they’re offering her – just so long as she’s working with them. It’s all about the illusion, and even if Pippa takes the job [a big IF], it’s going to come down to whether she will betray her family or not.

What do you guys think? Would Pippa Middleton give up the royal family secrets for her spot on primetime television? Or will she stay loyal to Kate Middleton and her sister’s family? Let us know your thoughts in the comments below.

Check out how Kate Middleton and Prince William look when they aren’t forcing their smiles for the photogs –  they LOOK like a couple who is going through a rough patch, don’t they? FameFlynet