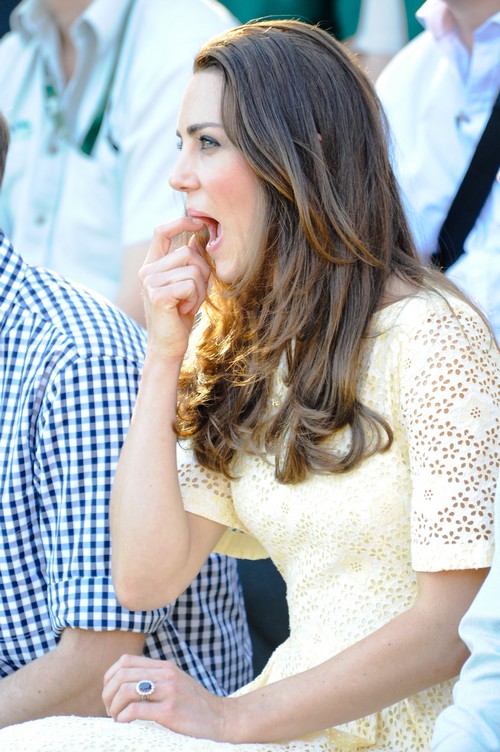 Kate Middleton and Prince William are already getting ready for baby #2, just before Prince George turns one. According to royal sources, Kate and Will have been trying for a second pregnancy all spring, and it looks like their wish has finally been granted. If the rumors are accurate, then Kate is already pregnant, and supposedly with a little sister for George.

Yes, that’s right – Kate and Will want to have a little baby girl. Granted, the royals won’t confirm this until it’s way closer to the due date, but it makes sense, no? Plus, Kate’s planning to take the next few months off to spend time with George and prep for another baby. Baby watch would go into overdrive if Kate made public appearances with even a slight stomach bump, and she’s better off keeping the speculation to a minimum.

Regardless, sources have added that Kate has cleared her schedule already, claiming health reasons. If she has the same difficulties with this pregnancy that she had while she was pregnant with George, those health concerns are definitely valid. Plus, she and Will don’t want to get overexposed and after a three week public tour, I think they both realize that it’s better they stay out of the public eye – both for the sake of their reputations, and their unborn child.

The royal sources also add that as soon as Will and Kate found out about the second pregnancy, Queen Elizabeth was NOT the first person they told. Uh-oh, that’s a major faux pas right there. But then again, the Queen isn’t exactly the easiest person in the world to reach, even for her immediate family. No doubt, they told Kate’s family first, followed by Prince Harry and the rest of the royals.

What do you guys think about Will and Kate having another child? Are you surprised that it’s so soon, or did you expect that Will and Kate would keep popping out children, especially since they’ve both expressed a desire to have a large family?