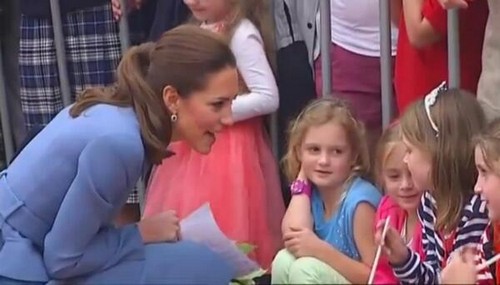 Taking your baby on an extended trip just leaves new parents wide open for numerous fiasco’s and disasters. That is precisely what Camilla Parker-Bowles was counting on when Prince William and Kate Middleton left for New Zealand with little Prince George. She was praying that the littlest heir would turn into a hellish embarrassment so that Kate’s mothering skills could them be called into question. Instead just the opposite seems to be happening.

Prince George seems to be just as enchanting as his popular parents and after day four the trip seems to be a great success. Kate and William stepped out last night for an unveiling of a painting of Queen Elizabeth and they looked amazing. Kate was glowing in her Jenny Packham gown and hardly looks like a stressed out mother traveling with an infant. Instead she looks like she has got it all under control.

Needless to say as each flawless image is seen by Camilla her mood is getting worse and her slugging from that flask of gin has increased greatly. It’s just one more failed opportunity to try and prove that Kate is evil and in no way should ever set a high heel near that throne. It is kind of funny the way that everything blows up in Cami’s face isn’t it? I mean Prince George could return home and be a screaming banshee for a month straight and it won’t matter because the world already has that joyous baby image stuck in their heads’ when they think of him thanks to this trek to New Zealand. Do you think Kate is really feeling as confident as she looks though? Tell us your thoughts in the comments below!