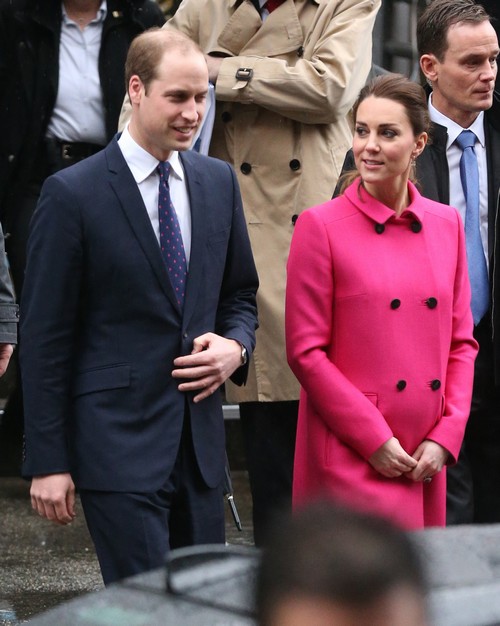 Royal watchers have been speculating on the sex of Kate Middleton and Prince William’s second child for months now with baby girl leading the rumor mill these days. As the Duchess of Cambridge’s baby bump began to grow, so did the rumors regarding the sex of Prince George’s little brother or sister. We have had our suspicions that Kate Middleton was having a girl after she left her ultrasound grinning from ear to ear – but now Star Magazine is officially confirming it which is odd since the palace does not release information exclusively, ever. All announcements are always public and made to all at the same time.

According to Star Magazine, “Kate is ecstatic. She was really hoping that baby No. 2 would be a girl, and having it confirmed has really given her a boost. Kate teared up and said ‘I knew it’ when she learned her baby’s gender – at a recent ultrasound, attended by both her husband Prince William and their son Prince George. George was too young to know exactly what is going on, but he’s learning a new word: sister.”

The magazine goes on to explain that Kate and William waited until right before they left for their New York City trip to reveal the news to their families, and they made the big announcement by holding a pink-themed baby shower, which was organized by Kate’s sister Pippa. Star’s inside source reveals, “There were pink iced cupcakes, pink cocktails, and a huge white cake – with a pink sponge and strawberry filling. George had pink icing all around his mouth and everyone was taking photos of him. He loved it!”

Now that Prince William and Kate’s suspicions are confirmed and they know for certain they are having a baby girl, they can settle on a name for the little Princess. While rumors have been running rampant that they would name their daughter Diana to honor William’s late mother, Royal Family insiders reveal that is not the case and they plan to name their unborn daughter Margaret Elizabeth. Margaret, after the Queen’s late sister, and Elizabeth after the Queen herself.

So, are you as thrilled as we are that Prince William and Kate Middleton are having a baby girl? Do you like the name Margaret Elizabeth, or would were you hoping they would settle on something else? Let us know what you think in the comments below!

Update: Now OK! is claiming that Kate and Will are going to name their new baby girl Charlotte! Of course we know that the royal family has not yet decided on a name for Kate’s second child and if they had, then CDL would let you know first. The palace will NOT confirm any names for Kate’s new baby before the child is born and anyone who tells you otherwise is wrong.