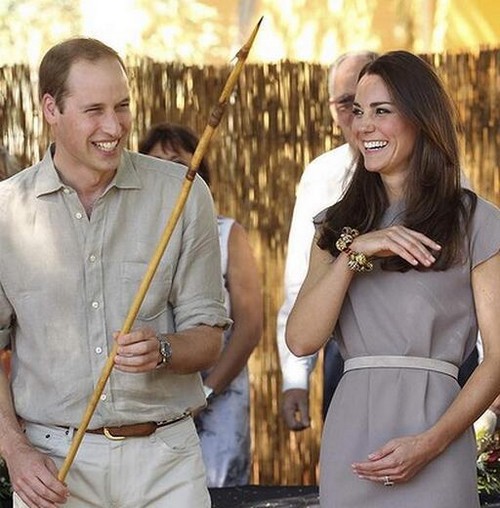 Kate Middleton and Prince William’s tour of Australia continued today with a beautiful stop at the iconic Ayer’s Rock where the couple stopped for photos reminiscent of those taken by Princess Diana and Prince Charles 31 years ago in precisely the same spot. Unlike William’s parents, he and Kate looked quite happy together as they posed in the hot Australian Outback sun. Ayer’s Rock is thought to be one of the most romantic spots in the country so it makes perfect sense for the young royals to take a bit of a tour.

The timing is also pretty interesting as well. Last week we learned that Queen Elizabeth had sent a hand written letter to Kate praising her for how well she has handled this important trip down under. Elizabeth reportedly told Kate that she now believes that she’s ready to be Queen and that she is like a “modern Diana”. Obviously there is no greater endorsement from Elizabeth to Kate than a statement like that. The difference between Kate and Diana is that royal watcher’s tend to believe that the duchess is actually quite happy in her married life with William.

Do you like seeing Kate and William visit the same locations that his parent’s did, for nostalgia’s sake? Do you think it’s one of the ways that he continues to stay connected to his mother? How about Kate being a “modern Diana”? Do you think that is a compliment that she has yet earned? Tell us your thoughts in the comments below!