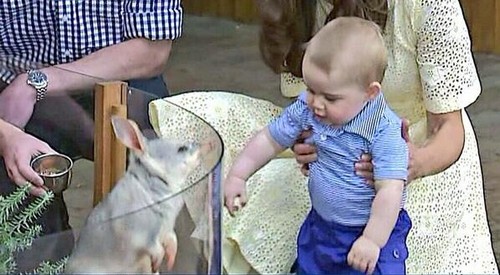 It’s almost a shame to watch Camilla Parker-Bowles try in vain to win over Queen Elizabeth, isn’t it? No matter what she may do and how kindly Elizabeth may react you still get the impression that there is a level of slime that she wants to scrub off. As Kate Middleton joined her young family for a tour of New Zealand and Australia, Camilla worked overtime to try and win Elizabeth over. She did manage to get her name added to the State Prayers list- which is a huge accomplishment- but that won’t get Cami up onto that throne.

According to the April 28th print edition of GLOBE magazine it is Kate who has absolutely wowed Queen Elizabeth. Sources say that she was glued to the television watching the footage of Kate and William overseeing Prince George’s public playdate and it made her realize just how great they really are. It finally clicked that Kate is ready to be Queen and that this young family does indeed represent the future of England. While Cami was enjoying face time with Elizabeth it was Kate who won her over even from thousands of miles away!

Do you think that there is anything at all that Camilla could do that would ultimately change Queen Elizabeth’s real perception of her? Is there any hope of her gaining the same kind of respect that Kate has garnered? Facts are that the circumstances of Prince Charles and Camilla’s long-term cheating affair while both were married make the pair of them disgusting in Elizabeth’s eyes. However Charles is her son so what can she do? Furtermore, Princess Diana was also cheating while married to Charles – what a mess! Who do you think should be crowned the next Queen, Camilla or Kate? Kind of a no-brainer, right? GLOBE explores Royal issues in detail so make sure to read this week’s issue if you want the inside track. Tell us your thoughts in the comments below!

Prince William and Kate Middleton arrive at the Royal Australian Air Force Base in Amberley, Australia on April 18, 2014.

Prince George – Easter at the Taronga Zoo in Sydney, Australia!