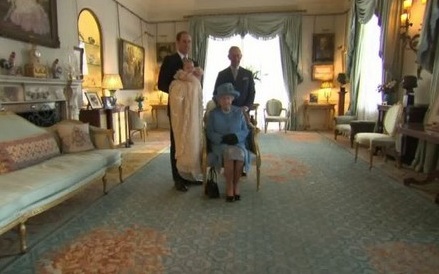 Is Prince George destined to always be the heir but never the king? According to a Christopher Lee, a notable British historian focusing on the royal family, Prince George will probably never take the throne in the future. Lee also tells the Daily Mail that George’s parents, Kate Middleton and Prince William, don’t have the gravitas necessary for a royal couple and that they’re mere ‘celebrities’ in the eye of the public.

Lee tells the Mail, “I don’t think they rate with the Beckhams, but I put them in that slot. They are ordinary, but they are celebrities rather than old fashioned ‘don’t ask questions, don’t touch me’ royalty.” He also adds that in another couple of decades, Kate and Will will end up like the Danish and Dutch royals, as in, “nice people but rather dull and inoffensive.”

And finally, Lee also explains that while Prince George may still be involved with the monarchy in some capacity in four or five decades, he doubts that George will inherit the throne in the traditional manner of today.

Well, first of all, despite the fact that this Christopher Lee is a noted historian, the fact that he’s speaking to the Mail kind of takes away from his comments, no? And also, the reason that Kate and William are considered celebrities is because in today’s media-obsessed world, they are celebrities. There’s simply no way for them to be the ‘don’t ask questions’ type of royals without being vilified by the public and destroyed by the media. There’s no way for any royals in today’s public eye to maintain that kind of ‘gravitas’, not with the amount of attention foisted upon them.

However, I do agree that in fifty year’s time, royalty will evolve drastically, to the point where George is probably famous for his royal connections but with little to do in running the affairs of the country.