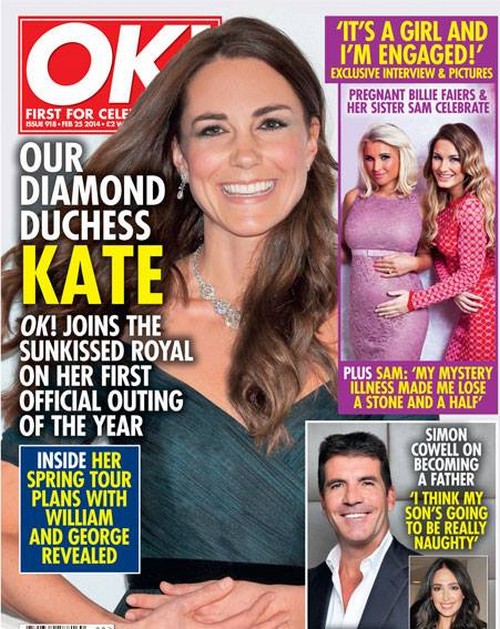 After spending a week with her family on the beach in Mustique Kate Middleton finally returned home and almost immediately her royal duties were calling. On Feb. 11th the duchess stepped out for her first official appearance of the new year. She attended the 2014 Portrait Gala at the National Portrait Gallery and the event was aimed at raising funds for the gallery’s daily operations.

The Feb. 23rd print edition of British OK magazine goes behind the scenes with Kate as she prepared for her evening of charitable work. She was dressed in a floor length Jenny Packham gown and the dress was secondary to the jewels adorning Kate’s neck. Prince William’s wife has been allowed to wear some of Queen Elizabeth’s jewelry for official appearances and the necklace that Kate wore to the Portrait Gala was certainly fit for a queen.

Being allowed to dip into The Queen’s goodies is a reward that has been given to Kate for making some changes to her wardrobe. She suffered a few recent wardrobe malfunctions that left her exposing her panties to commoners and it’s simply an unacceptable situation especially if she hopes to someday be queen. Elizabeth is rumored to have sat Kate down for a chat and she is now working on creating a classier look- one that features longer hemlines. The queen knew that she was asking Kate to really compromise her own personal style and so she has allowed her to dip into the royal jewels to lessen the blow.

Do you think Kate looks better in a more demure dress, especially if she gets to show off serious bling? Tell us your thoughts on Kate’s evolving style in the comments below!