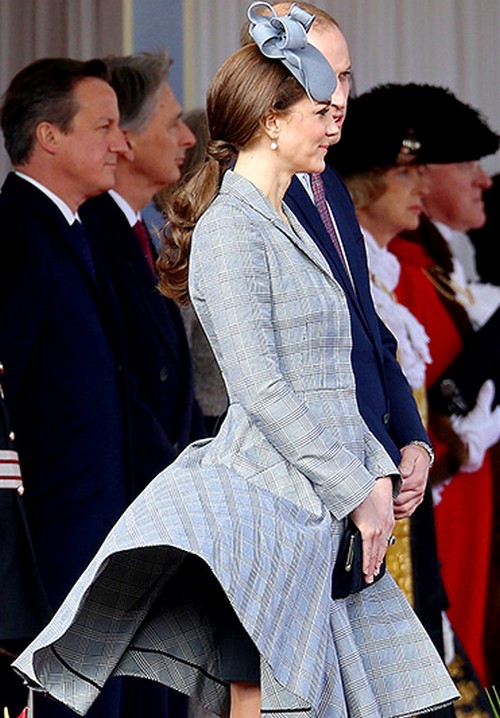 Kate Middleton made her first public appearance since announcing her second pregnancy on Tuesday morning, and her first red carpet that night after welcoming the President of Singapore and his wife at London’s Royal Garden Hotel. However, it wasn’t her appearance that stole the headlines, but rather another underwear exposing wardrobe malfunction.

I know, shocker! Kate Middleton has become synonymous with wardrobe malfunctions, hasn’t she? I can’t even remember a time when Kate managed to go an entire year without some sort of wardrobe controversy, whether it be her fault or the paparazzi’s fault.

However, Kate seems to have learned her lesson from the multitude of past wardrobe malfunctions, since she was wearing  slim fitting black sheath underwear underneath her coat. So when the wind came and blew up her Alexander McQueen dress skirt, the sheath saved the day. There was no bare bum controversy, and no paparazzi managed to get lucky shots of Kate going commando. In fact, the only thing that we could clearly make out was Kate’s baby bump, which is steadily growing and becoming more and more visible every day.

Still, I can’t imagine Kate Middleton’s wardrobe malfunction is making the royals very happy. This is the first time she’s made a public appearance since her pregnancy announcement, but instead of the focus being on her improving health and the President of Singapore’s visit, it became all about Kate’s dress flying up.

What do you guys think of Kate Middleton’s upskirt moment? Are you surprised at all? Or has this become par for course? Let us know your thoughts in the comments below.

Update: Kate survived much better on her first red carpet since her second pregnancy announcement. One could barely notice Kate’s pregnant baby bump but it was there! Kate looked amazing in Jenny Packham baby blue tight fitting gown (see pics below). The event followed the Singapore swing and was held at the Natural History Museum in London, of which Kate is a patron. Kate was a presenter at the the 50th Wildlife Photographer of the Year competition.

Kate Middleton out and about Tuesday October 21 on her first official appearances since announcing her second pregnancy: