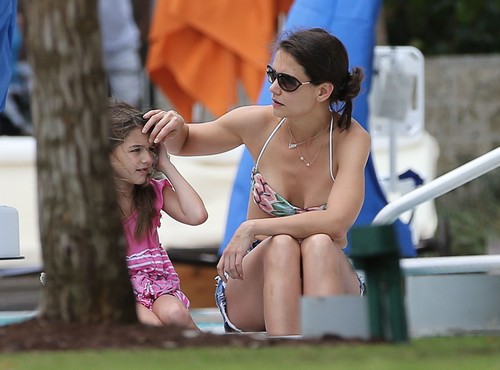 It’s funny, whenever there’s a retrospective of major teen shows, Dawson’s Creek always pops up. And rightly so, considering it was one of the most influential teen shows of its generation. But it’s also fascinating to look at its stars and where they are today. Back when the show was at the height of its popularity, James Van Der Beek was without a doubt the biggest star, closely followed by Joshua Jackson, and then Katie Holmes, and THEN Michelle Williams. But now? Well, it’s kind of the opposite, isn’t it?

Michelle Williams is the most critically acclaimed actress, with Katie Holmes a distant, distant second. Katie’s career was hot once upon a time, right after Batman Begins and before she became the robo bride of Tom Cruise. Unfortunately, her career went down the drain the longer she remained married to Tom, and by the time she got the divorce and the escape, it was a tad bit too late. While she was on the cover of tabloids and making headlines for her relationship, Michelle Williams was slowly racking up Oscar nomination after Oscar nomination.

Anyway, a new report from OK! Magazine claims that due to the dire straits of her career, Katie Holmes is desperate for a Dawson’s Creek reunion. However, the report also claims that she’ll have to beg Michelle Williams to agree to it, considering that they weren’t exactly bosom buddies during the making of the show.

A source explains, “Michelle and Katie did not get along while the teen drama was on the air… but Katie hopes they can both put the past behind them. She wants to make amends with Michelle. Katie’s all over that now and she’s much more confident and stronger as a person and will let bygones be bygones. The reunion is just as much about restoring a friendship as it is about a TV show.”

For good measure, the report also adds in the fact that they’re both single mothers to young girls. Way to be manipulative, but I guess it suits their target audience.

What do you guys think? Is there a possibility that the cast will reunite for a Dawson’s Creek special, especially if Michelle Williams agrees? Let us know your thoughts in the comments.

Katie Holmes relaxes poolside on New Year’s Day with her daughter Suri in Miami, Florida on January 1, 2014. Katie soaked up some sun in a bikini top and jean shorts while Suri took a dip in the pool!