Katy Perry Disses Miley Cyrus, Calls Her Out For Being a Slut and Sleeping Around After Tongue Kiss 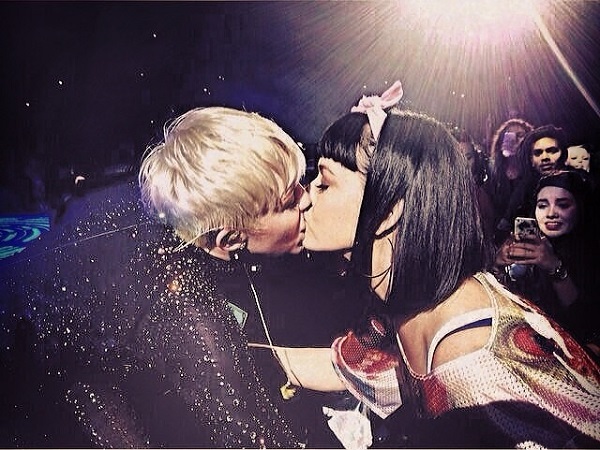 Katy Perry has totally dissed Miley Cyrus directly implying that she is a ‘rachet ho‘ who carries STDs on her tongue. One thing that Miley certainly is is a lip-syncing fake – just watch the video below and you’ll note that Miley’s lame auto-tuned vocals continue seamlessly while she kisses Katy.

Katy stated, “I went to her show, which is amazing. It’s very colorful. She has this one part where it’s like a kiss cam. I just walked up to her to give her like a friendly girly kiss, you know, as girls do, and then she like tried to move her head and go deeper, and I pulled away. God knows where that tongue has been. We don’t know. That tongue is so infamous!”

Slut shaming much? Sure, she doesn’t call Miley any names nor does she say it in a derogatory manner, but why couldn’t she just have stayed silent on the matter? Instead, she’s insulting Miley and indirectly feeding the rumors about Miley sleeping around. Like Katy’s that much better when it comes to her taste in men? Girl, you slept with John Mayer and Russell Brand. And you want to compare yourself with Miley, who was actually in a monogamous relationship with Liam Hemsworth for more than three years. Sure, she’s gone off the bend recently, but don’t front like you’re so much better than her.

What do you guys think? Should Katy have said what she did? I’m sure she wasn’t insinuating anything negative and that she meant it as a joke, but she should think twice next time, no? Let us know your thoughts in the comments.