Keeping Up With The Kardashians LIVE Recap: Season 9 Episode 15 “A Thailand Vacation Part 1” 7/20/14

BY Amanda Austin on July 20, 2014 | Comments: one comment
Related : Keeping Up With The Kardashians, Reality TV, Recap, Television 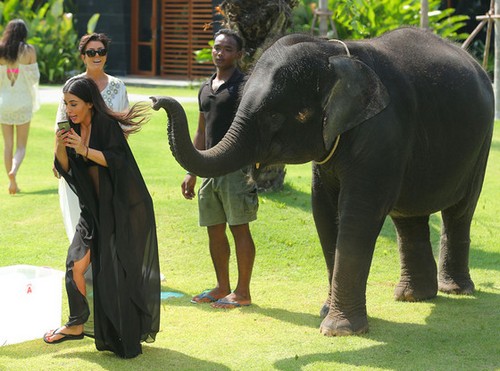 Keeping Up With The Kardashians continues tonight with a new episode called, “A Thailand Vacation Part 1.” On tonight’s episode, Kim and Khloe face off in the mud; Kris helps Kourtney shut down Scott’s backyard plans.

On the last episode Khloé struggled with moving out of the home she shared with Lamar, and making matters worse was the discovery that expensive jewelry was stolen from their house. Later, she traveled with Kim and Kourtney to New York City to check on their Dash store; at the same time, Bruce stumbled in his attempt to bond with Brody. Did you watch the last episode? If you missed it, we recapped it all right here for you.

On tonight’s episode Part 1 of 2. A family vacation to Thailand gets off to a rough start when Kourtney, Scott and Rob decide to bail out on the trip. Meanwhile, Kris and Bruce find it difficult to get along; and things take a turn for the awkward when Brody walks in on Kim taking a sexy selfie for Kanye.

Tonight’s episode of Keeping Up With The Kardashians begins with Khloe arriving at Rob’s condo, where she will be staying until she finds a place to live. All of her stuff is officially out of the house she shared with Lamar. Rob jokes that he put some sex toys in the shower for her.

The next day at the Jenner house, Kris, Bruce, and all of their kids gather in the livingroom to vote about which country they will be travelling to. They ask Khloe where Rob is, but he couldn’t make it because he is at the gym (no one believes her that he is at the gym). They hold the voting, and it is decided they will be headed to Thailand. Kris can’t wait to get a Thai massage with a happy ending.

Kris is concerned that Rob won’t go on their family vacation. Khloe says he is excited about their trip to Thailand, Kris says it is Khloe’s responsibility to make sure that Rob actually goes to Thailand with them. Meanwhile Kim is shopping for cameras with her assistant because she wants to make Kanye a book of selfies of her, since he will be in Germany while she is on vacation.

Later Kris confesses to Kim that she is having an anxiety attack stressing out about going on vacation with Bruce, because he wants her to do a whole list of activities with her and she just wants to relax. Kim tells her she should invite Brandon, Leah, and Brody to go with them so that they can keep Bruce busy.

The family doctor shows up at the Jenner house to give them all their vaccinations for their trip to Thailand. Even Rob shows up to get his vaccinations. They leave in the middle of the night for the airport. Kourtney decided at the last minute she was too sick to go to Thailand and Mason has ear infections so they are staying home.

The entire family shows up at the airport, but Khloe is stressed because she couldn’t find Rob and left for the airport without him. As they board the plane, Khloe texts and calls Rob and he is still ignoring her. Khloe is freaking out because she has no idea where Rob is or why he is ignoring her. Khloe is considering not going, so then Kendall announces she isn’t going. Khloe finally decides to leave without Rob, and they head to Thailand without him.

The Kardashian family arrives in Thailand and head to the Iniala Resort. Their concierge gives them a tour of their suites, and of course Kim got the suite with her own private floor. She wishes Kanye could be there with her though. Khloe heads out to the beach and tries to call Rob again, but he still isn’t answering.

Kim thinks that Khloe is making too big a deal over Rob not showing up. She thinks that everyone should stop babying him and give him some “tough love.” Khloe doesn’t want to hear it though, because Kim obviously doesn’t understand Rob’s issues.

Kim doesn’t have time for Rob’s drama though, she has a selfie book to make. She and her assistant begin taking photos of her for the book she is making for Kanye. Later that night they all head to the beach for a fire-twirling show and fireworks. While everyone is enjoying the show, Kim spends the entire time trying to take pictures of herself with fire in the background.

At about 4:00 AM, Brandon, Brody, and Leah arrive at the restort. The next day Bruce, Kris, and the girls head out to go zip-lining in the jungle while Brandon, Brody, and Leah get some sleep. Kylie and Kendall zip-line first and have a blast, meanwhile Kim is having a borderline panic attack on the platform. She breaks down in tears and cries that she doesn’t want to do it. She climbs down and refuses to participate. Kris and Bruce go together and he screams the entire time and scares Kris and tries to convince her that they are falling. Kendall has already had enough their bickering.

After their ziplining, Kris and Bruce ride back to the resort in one van and Khloe, Kim, Kendall, and Kris ride back in another van. Kris asks the driver of their van to slow down, but he won’t. Then they rear end another vehicle on the road and are in a minor fender bender.

They all finally get back to the resort, and Kris and Bruce are still bickering over ziplining and their car accident. Later that night Kim is having her assistant take some topless selfies of her, and Brody walks in and catches them. Kim is mortified, but Brody won’t leave and stop laughing at her. Brody runs back upstairs and tells Leah and Brandon about what he saw. They all laugh at how turned on Brody is of his sister.

Later that night they all sit down for dinner, and Bruce insists that they all go canoeing together tomorrow. Kris is annoyed because she wants to just relax and get a massage. They drag all of the kids in to it and ask whether they want to follow a schedule or just relax and do what they want to do in Thailand. Kris confesses that she had a plan and invited Brody and Brandon to keep Bruce busy so that she can enjoy herself. Kris storms off, and Kendall and Kylie follow her and accuse her of lying and want to know what she meant of her “plan.” Kris flips on them for calling her a liar, and they stomp off.