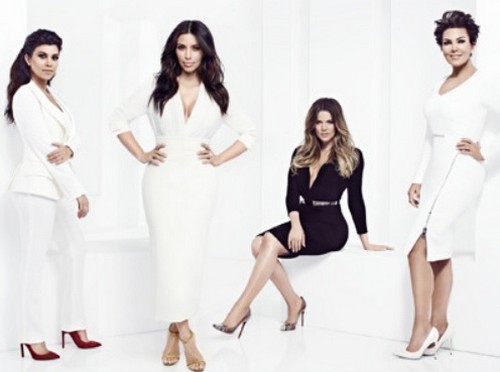 Keeping Up With The Kardashians continues tonight with a new episode called, “Party Dirty.” On tonight’s episode, Kim and Khloe face off in the mud; Kris helps Kourtney shut down Scott’s backyard plans.

On the last episode Kim and Kris encountered some shocking racist remarks on a trip to Vienna, meanwhile Kourtney had second thoughts about moving into her new home and decided to find reasons to delay the move. Did you watch the last episode? If you missed it, we recapped it all right here for you.

On tonight’s episode Kris thinks Kourtney needs to put her foot down when it comes to Scott and his lavish plans for a new backyard. Meanwhile, Kim and Khloé get down and dirty when they participate in a mud run.

Tonight’s episode of Keeping Up With The Kardashians kicks off with Khloe play-fighting with Mason, while Kris, Kendall, and Kylie watch and laugh. Meanwhile Bruce is out to lunch with Scott, they make plans for Scott to come to Malibu and fly his helicopters with him. Bruce asks him about both of his parents passing away, and Scott confesses that it is devastating because a part of his life is over.

Kim and Khloe are training for a Mud Run, so they meet up with Rob to go for a hike. Khloe thinks that Kim is turning everything in to a competition, and all she ever talks about is exercising and eating healthy.

At the Jenner house Scott is discussing his goal to become like the guys on Wolf of Wall Street. Scott wants to get a helicopter in his backyard. He thinks that Bruce can be his private pilot. Kris takes Courtney aside and lectures her that it is “irresponsible and not smart” to let Scott get a helicopter. They just bought a 13,000 sq. ft. house and they have two children to raise, and helicopters are expensive, not to mention hangar fees and paying a pilot.

Kourtney and Scott head outside to discuss their hedges, and Kourtney gives Scott permission to put a chopper pad in the backyard. Scott has been really depressed lately and Kourtney doesn’t want to be his boss all the time, so she is leaving it up to him.

Khloe and Kourtney head to the gym to take an aerial yoga lesson, Khloe needs anything that will give her an edge over Kim in the obstacle course mud run. They meet with a trainer named Jessica, and she begins teaching them how to climb the fabric hanging from the ceiling. Khloe goes first and makes it up the fabric, and then Kourtney blows everyone’s minds and is able to do poses and flips in the hoop hanging from the ceiling.

A consultant arrives at Scott’s house, and he takes her outside and shows her the backyard. She is going to be able to tell him whether there is enough room behind his house to put up a chopper pad. Bruce arrives and Scott introduces him to the consultant as his pilot. The consultant reveals that first he has to go to the Home Owner’s Association and get permission from them to fly helicopters out of his backyard.

Bruce and Scott head to a warehouse to meet with a flight instructor, and Scott explains that he is looking to buy a helicopter. Bruce is excited about his new found shared interest with Scott. Scott plans to call his helicopter “LD Air,” after Lord Disick.

It’s finally time for Kim and Khloe’s Mud Run. They head to the obstacle course and line up at the starting line. Khloe is determined to beat Kim, because Kim is being too competitive. Khloe takes the lead quickly, and leave Kim in the dust. She loses her shoe in the mud though, and Kim has a chance to catch up.

Kim and Khloe wind up wrestling in a huge mud puddle, they decide to just have fun and cheer each other on. Khloe thinks it’s great to just have sister time, and they finish the obstacle course together hand in hand.

Scott arrives at the Jenner House and surprises Bruce with a pilot uniform that says “LD Air.” Kris is disappointed that Kourtney hasn’t reeled Scott in and shut down his wild fantasy of having a helicopter in his backyard. She informs Scott and Bruce that Bruce is too old to be flying helicopters anymore, and his instincts aren’t what they used to be. Kris takes Kourtney outside and asks her why she isn’t shutting down Scott’s helicopter plans. Kourtney explains that she doesn’t want to be bossy like Kris, and have Scott resent her like Bruce resents her.

Later Scott takes Bruce out to his backyard and shows him the area that has been roped off for a helicopter pad. Scott didn’t realize how much of the yard it was going to take up, and he realizes it is going to be dangerous if one of the kids runs over there while he is taking off. He is beginning to have second thoughts about getting a private helicopter.

Kris visits Kendall in her room, and asks her if she thinks that she was too controlling with Bruce. Kendall says that she can definitely see why her Dad would think that because she has a strong personality. Kendall asks if they split up because she was too controlling. Kris insists that their divorce has nothing to do with how bossy she was, and she and Bruce just grew apart over the years.

Scott decides to compromise and not get a helicopter. Instead he uses the backyard to set up a huge slide that takes up the entire length of their yard. Scott takes Mason outside to try out his new slide, and Bruce and Kris come over to check it out. Kris is proud that Scott made the right decision on his own.

Later Kris heads to Malibu and goes for a walk on the beach with Bruce, she wants to know if what Kourtney said was true and she was too controlling. She doesn’t want to be the “crazy bitch.” Bruce reassures her that she isn’t a bad person, she just handles things badly. He does think that she was a little controlling, and always wants things her way. Kris doesn’t regret making the right decisions for her family, but she apologizes for how she went about things. She knows her and Bruce have grown apart, but they will always be good friends.