BY Serena Spates on August 4, 2014 | Comments: one comment
Related : Keeping Up With The Kardashians, Reality TV, Recap, Television 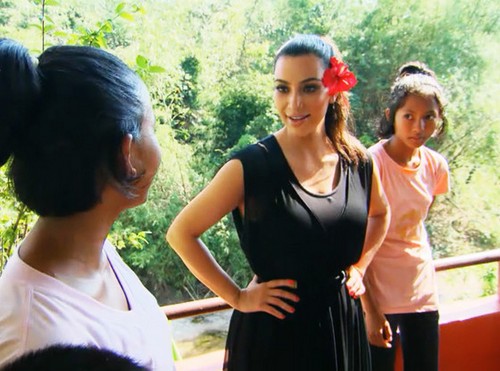 Keeping Up With The Kardashians continues tonight with a new episode called, “A Thailand Vacation Part 3.” On tonight’s episode, the family vacation to Thailand continues to be full of drama.

On the last episode, Part 2 of 2 the family vacation in Thailand continued to be full of drama, beginning when Kendall and Kylie who ran off and couldn’t be found. Meanwhile, Khloé was crumbling under the pressure of feeling like everyone expected her to be Rob’s keeper; at the same time, Brody had revenge on his mind after being teased about walking in on Kim taking sexy selfie photos. Did you watch the last episode? If you missed it we have a full and detailed recap, right here for you.

On tonight’s episode Part 3 of 3 the family vacation to Thailand continues to be full of drama, beginning when Kim connects with a young girl in a Thai orphanage. Brody and Brandon cheer up Khloe.

Tonight on “Keeping Up with the Kardashians” the family continues their vacation in Thailand where Kim connects with a young girl in a Thai orphanage and Brandon and Brody try to cheep Khloe up.

Tonight’s episode begins with Khloe who has decided to stick out the rest of the vacation training in the boxing ring with a thai trainer. Brody suggests that she get her frustration out by having a little vacation fling. Meanwhile Brandon plays the guitar while bruce serenades the gang about going to an orphanage. After their performance Kris reads off the list of supplies they will be taking to the orphanage.

The family heads to the orphanage where they meet the children who live there and get a tour of their homes. Brandon and his fiancé sing one of their songs while the children sit around in a circle and listen. Kim then tells the kids that they have gifts and then they all spend some one on one time with the kids. Khloe is enjoying the time but still worries about Rob and wishes he was there to experience it with them. Kim bonds with a 13 year old girl named pink and makes a hand paint collage on the wall. Kim signs the wall  and the family takes a group pic with the children. Before they leave Pink runs up to Kim and gives her a bracelet. Kim is touched that Pink who has nothing gave her a bracelet.

Later that night at dinner Brody jokes that Khloe should hook up with her Thai trainer and Khloe is mortified. They ask her about Lamar and she explains that he’s somewhere in New York but she can’t find him. She says she feels guilty and responsible for him and that she just can’t help worrying about him. Khloe who is on the brink of tears says she just can’t talk about it anymore.

Bruce, Brandon and Brody head to Thai boxing without the women. Brody asks about Kim’s wedding and where his invite is. Bruce and Brandon both says they don’t have an invite yet either. They joke about finding someone for Khloe and say it’s a lot of work but they’re determined to find her a Thai boxer. Brody asks Bruce about his love life and Bruce says he’s done after strike three. Once they make it to the boxing ring they immediately start scouting out a prospective hook up for Khloe. They walk around the gym showing her picture but have no luck.

The next day Brody talks to Kim who can’t stop thinking about the orphan Pink. She ponders on what else she can do to help Pink and the other orphans. Kim asks Brody if he wants to have kids and he says he’s not sure and that he’s just waiting on Brandon to have some. Brody says it’s too crazy to have kids with the paparazzi. Kim says Kanye has to do 50 hours of community service for snapping on the paparazzi.

Brandon and Kris discuss Rob and Kris thinks he needs to be around positive people. She’s also worried that Khloe feels too much responsibility for Rob because she feels guilty that her relationship with Lamar had a negative influence on him since he lived with them and was so close to Lamar. Kim joins them and Kris breaks out the Vogue issue with Kim and Kanye on the cover. Kris says it’s like her bible. Kim brings up the orphan Pink she who can’t stop thinking about. She tells Kris and Brandon that she wants to adopt her. Kris tells Kim she just can’t go to an orphanage and pick out a kid like it’s shopping. She tells Kim to consider helping in other ways but Kim feels that she just doesn’t get it.

Kim and Brody take a selfie on the beach and tells Brody and Brandon about her wedding. She tells them it will be in Paris and they’re all invited. Leah, Khloe, Brandon, Kylie and Kendall go out on the boat and take a dip in the ocean. They all go to lunch where Brody and Brandon tell Kris they found Khloe’s future husband. They call him on the phone and put him on speaker. He puts Kris on the phone and she pretends to be Khloe. She invites him on a coffee date and he agrees to come. They all cheer because they finally got Khloe a date.

Kris and Kim meet with Mark the founder of the orphanage. They tell him how much they enjoyed the experience of going to the orphanage. Kim tells him about her attachment to Pink and she asks if the kids are up for adoption. Mark tells Kim that she can’t adopt in Thailand because the government is worried about people coming in and adopting for the wrong reasons. He tells her that they are coming up with plans to rebuild the orphanage so the orphans have better living conditions. Kris says they can go and find out how they can help with the rebuilding and Kim says that’s a great idea.

The family heads to a Bhuddist temple. Khloe hopes this will give her some peace and serenity. The sit in the temple with monks where they receive blessings. Khloe feels the trip has been very stressful and is happy to finally be in a place where she feels a good vibe. She goes off on her own to get a blessing from the monk. Kim finds her and tells her to just needs to relax and take care of herself instead of worrying about Rob. Khloe, who has been trying to avoid Kim, is now annoyed that she keeps trying to teller what to do and how to live her life.

Kim says it wasn’t fair for the family o assume that she would move in with Rob and just fix him. Khloe finally agrees and says she’s right and that she will take the time to work on herself and let Rob work out his own issues. They walk off into the sunset holding hands.

Kim returns to the orphanage to give them some clothes and supplies. Kim asks to see the handprint collage and she looks at her and Pink’s handprints. She giveS Pink a thank you present and says goodbye.

Kendall and Khloe walk on the beach and stumble upon a wedding. They take a pic with the bride and groom. They head back to the beach bar where they run into Brandon and Brody who tell her she should go out with the Thai boxer they found for her. She politely declines and says she’s just not ready to date. Brody goes tot he bar to order some wine for Khloe when Kendall comes up to Brody and says a guy just touched her butt. Brody confronts the guy but avoids getting into a confrontation when the bar security throws the guy out. Khloe applauds him for standing up for his sister and realizes that he was only trying to do something good when he found that Thai boxer for her to date.

The family gathers for their last dinner in Thailand where Kris tells everyone she has a surprise for them on the beach. They all walk down to the beach to find a latter releasing ceremony. Kris says it’s all about letting go of things that are holding them down. Kendall lets go of her young self, Kylie lets go of her negative energy, Bruce lets go of his lousy putter, Kris lets go of her fear of change and Khloe lets go of the responsibility of others and says sometimes you just have to let go and let God.