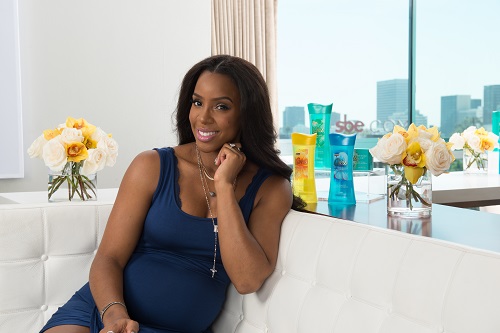 Just when you thought Kelly Rowland could not be any more adorable, she found a way to increase that “it” factor she has after sharing that she treats beauty marks like an American Express card and never leaves home without one. Kelly was discussing her new role as Caress’ new celebrity “Fabulista” when she shared her love of moles with People Magazine, admitting to drawing one on her face every time she goes out.

Partaking in this daily ritual to do something that she likes, something that makes her feel good, supports her new “Fabulista” title perfectly, as her goal is to inspire women to take time out of their busy schedules to pamper themselves by indulging in some of Caress’ ultra-relaxing, richly-scented products.

Caress truly picked the best Fabulista for the job, and we know first-hand because we had the exciting opportunity to talk one-on-one with Kelly about her new Fabulista title, her upcoming fifth album, her cute little baby bump, and more!

Kelly spilled on all the advice she has been given as an expectant mom. She laughed that, “everyone gives me advice…even people I don’t know!” She enjoys the support, however, and appreciates how women can bond over the ability to give life. One of her favorite tips was to use cocoa butter on her belly. She has done just that, admitting to using the rich cream on her belly.

With her first and only child with husband Tim Witherspoon due this fall, Kelly absolutely glowed when talking about the daddy-to-be, sharing that he is taking such great care of her. From fetching food to satisfy cravings, to nice foot massages, Tim does it all. Kelly even gave some specifics on her food faves right now. She admits to spending almost as much time at Nobu as she does at home! She also confessed to being a regular at Cecconi’s. Looking at her, though, you’d wonder where she puts it all!

Though she described her incredible 2013 super bowl half-time performance, where Destiny’s Child fans had the one-of-a-kind opportunity to see the trio reunite, as “Great…really fun,” this triple threat has come a long way since going solo. But the humble star doesn’t boast or brag because she is Kelly Rowland and that is just not her style!

Speaking of style, Kelly is going for lightweight comfy clothes now that she’s got a little belly to make room for. After sharing her chosen pregnancy attire, Kelly shared her favorite Caress body washes, noting that while she loves them all, “Emerald Rush and Juicy Escape are my favorites.” Kelly chose Evenly Gorgeous as her favorite exfoliating body wash.

When asked if she plans to slow down after adding “mom” to her list of talents, Kelly confirmed her plans to “do everything I’m doing now. I’ll just have my baby with me.” And Kelly is already getting some practice having baby along while working, as she and her belly have been hitting the studio as she works on her fifth album. She describes the experience by sharing, “It‘s been a really easy process,” noting how her team and everyone working with her on the album have been incredibly supportive.

In addition to being nominated for the 2014 Video Music Awards for Best Video with a Social Message for her tenderly honest and raw hit Dirty Laundry, Kelly will be announcing the winner of the Caress “Amp Your Fab” selfie contest at the event.

With such a busy schedule, Kelly leaves most wondering if she ever sleeps! When inquiring about her free-time favorites, Kelly gleefully shares, “I love the beach. I love just being at the beach because it’s so relaxing.” She also shared that her TV time is dedicated to just a few select shows, “I am really liking Ray Donovan now. I also really like Power [on STARZ].”

Not only does she enjoy the show Power, she has an added incentive to tune in: “My really good friend is in it…La La Anthony.” She also admits she’s excited about watching Game of Thrones. I forgot to tell her to enjoy the little free time she has for watching TV — those days will come to a screeching halt once she and Tim welcome their first into the world.

Be sure to watch out for Kelly’s new album and upcoming projects by visiting www.kellyrowland.com. Find out more about the selfie contest and check out all of the great Caress products Kelly’s been using by visiting www.houseofcaress.com.