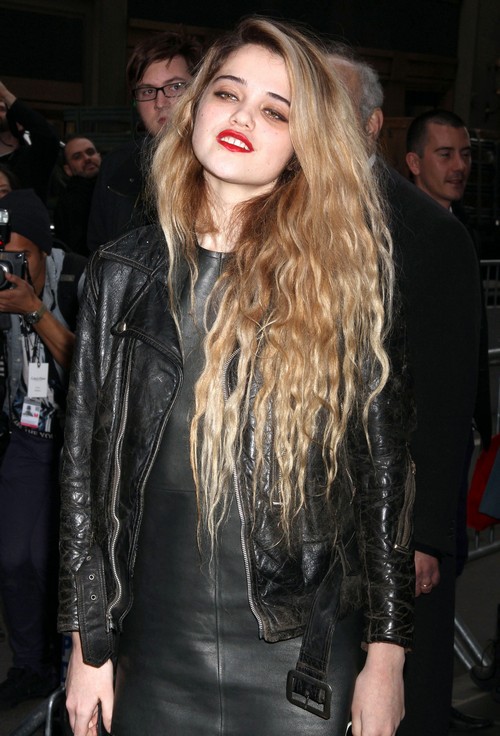 Is Harry Styles getting sick of Kendall Jenner already? And if he is, can you blame him? The boy’s only 20 years old, and on top of that, he’s one of the most famous musicians in the world [to teenage girls]. He’s got plenty of women to choose from, and beyond aesthetics, I can’t imagine Kendall really has all that much to offer. I’m not trying to be mean, but we’ve already seen her interviews. She’s not going to start reciting Proust anytime soon, is she?

Sure, Harry’s not looking for anything serious, and sure, Kendall’s significantly better looking than her sisters. But when it’s a choice between someone as talented as Sky Ferreira and a reality famewhore Kardashian, who in their right mind would pick the Kardashian?

According to the Mirror, Harry and Sky were spotted getting close at London’s The Box nightclub on Friday night, the same night that Kendall was setting tongues wagging at Fashion Week. You’d think Harry would be supporting his ‘girlfriend’ instead of partying, no? I guess not.

A source tells the Mirror, “The two of them were together for most of the night and seemed all over each other – whispering in each other’s ears and giggling. Harry and Sky left at the same time and looked very merry – they were stumbling down the stairs.”

Unfortunately, Sky has already denied the rumors of her hooking up with Harry, explaining that she was on a concert cruise to the Bahamas. However, that doesn’t necessarily mean that Harry was not at the Box, nor that he was flirting with a blonde who was not Kendall Jenner. Maybe eyewitnesses got mixed up between this mystery girl and Sky, especially since nightclubs are dark and smoky, and it’s always difficult to see what’s going on in the VIP sections.

What do you guys think? Was Harry cheating on Kendall? Let us know your thoughts in the comments.