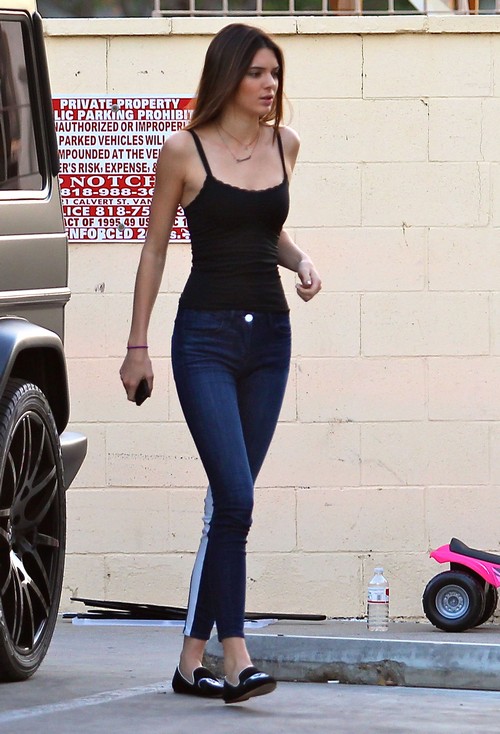 In a desperate bid for attention, Kris Jenner has moved from pimping Kim, Kourtney, and Khloe Kardashian (who are now way past their expiration date), to pimping her newest money-maker, Kendall Jenner. While most moms post pics of dance recitals, A+ papers and birthday parties, Kris has posted a pic which has left everyone whose seen it with the word “gross” etched in their minds.

Young Kendall, barely 18, walked the Marc Jacobs show for fashion week. And while most moms preach modesty to her daughter, all bets are off for momager who posted a pic of Kendall’s right-there, all bare nipples with the following, “I am so so proud of you.” Well, in comparison to her other daughters, perhaps Kendall is giving Kris something to be more proud of. Let’s face it, not much competition on the “things that might make mom proud” front.

Kris has been worried sick lately about the future of Keeping Up with the Kardashians as their contract is set to expire in 2015. Her talk show bombed, and interest in Kim, Kourtney, and Khloe has waned. No one is interested in Kris, and with Bruce’s departure from the show (which Kris still denies out of fear she’ll lose more viewers), that doesn’t leave her with much…well, that is, except for Kendall and her nipples. So will these prominently placed nipples be enough to save her sinking show? Likely not, but I’m sure she’ll continue to post any pic that involves a sexy Kendall, as Kris learned early on from Kim’s sex tape that sex sells. Kris knows that Kendall is her only hope at this point, so she is trying to build a sexy image to begin the branding of the Jenner girls, which includes Kendall and younger sister Kylie. Neither have any real talent, and critics have said the Kendall is not typical model material and is only walking the catwalk based on who she is or favors being granted to Kris. Many in the industry have said Kendall isn’t anything special and wouldn’t normally be working shows like this if it wasn’t for her famous family or favors owed.

Kris will surely milk this for all she can and is now moving full steam ahead and promoting a sexy image of her young daughter, even if that means posting pics of her exposed nipples for all to see. Let’s hope this is all we’ll be seeing for a while. Hollywood Hiccups has the photo right here – be warned it’s pretty extreme