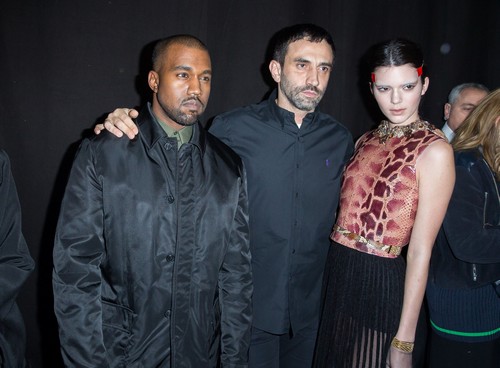 You know the saying what happens in Paris stays in Paris, or at least it goes something like that. Well CDL can’t help but wonder if that is the case with Kanye “Yeezus” West and Kardashian Klan member Kendall Jenner. Kendall hit the runway for Givenchy during Paris fashion week this past weekend, and her “brother” Kanye was there in the front row cheering her on; noticeably absent was Ye’s baby mama and Kendall’s big sis Kim Kardashian.

Kendall continued her catwalk as a high fashion supermodel this weekend and she was still looking pretty good. In fact, she looked so good she had G.O.O.D Music honcho Kanye West’s eyes glued on her during Givenchy’s show. Kendall was rocking a sheer printed sleeveless top with a sheer black skirt, so she gave everyone an eye full of what she is working with. Inquiring minds want to know, just how much Kanye did like what he could see from his prime front row seat.

Khloe tweeted a photo of Kendall and Kanye with the caption “family” under it (see gallery below). The photograph shows Kanye and Kendall looking pretty chummy with a white light filtering through the shot. If Kendall and Kanye got any closer than they did in the flick, at least we know Kanye is keeping with the Kardashians by keeping it in the family. Now before you Kimye lovers out there go postal, please take a moment to understand where these speculations come from.

For starters, Kim had a disastrous trip to the Vienna Opera Ball last week as the date and paid escort of Austrian businessman Richard Lugner. The trip quickly made headlines for a lot of unsavory reasons. Of importance to the current discussion is the commentary regarding the move on Kim’s part to attend as an escort and the message it sent to the public about Kim’s character and fitness to be a Vogue big time “A” list celebrity. You can bet there was some tension going on between her and baby daddy Kanye after the fiasco as the self-proclaimed “genius” rapper was radio silent on his fiancée’s trip. We all know how vocal Kanye is and he is not one to shy away from proclaiming his fiancée’s greatness, even if the rest of the world doesn’t agree.

Once you couple the tension from Kim’s Vienna trip with Kanye’s extended solo trip to Paris, you have yourself a recipe for cheating disaster. Well what better way to keep your cheating on the low than to cheat with someone who has just as much to lose as you, if the illicit affair is made public. Understand that Kendall would be a perfect choice as she would gain nothing by revealing an indecent tryst with Kanye. Plus, let us be honest, the Kardashian Klan is not known for their high moral standards. This scandal would just be another to add to the list.

Also, Kendall has the svelte model shape that Kanye likes. Even though his last two high profile relationships were with big bootied girls Amber Rose and new fiancée Kim Kardashian, it is well known that Kanye loves his model ladies. Kim’s shape is the polar opposite of a fashion model’s shape. She can’t cater to Kanye’s desire for that body type ever in life. Kim has paid too much money in plastic surgery to ensure of that. Meanwhile Kendall is young, fresh and new; she also is still fairly au naturale as she has not had the opportunity to have too much cosmetic work done just yet. Sounds like she would be the perfect choice for a down low hook-up with Yeezy.

Unless Kanye was in the mood for some “Same Love” loving from rumored man boo Ricardo Tisci, you can bet that he was jonesing for some Kendall attention. Maybe Kanye is just at a point where he is thinking about some special time with Kendall. If so, hopefully he is watching those thoughts because they turn into words that are followed up by action. Let us know what you think about these CDL musings, do you think Kanye is hooking up with Kendall or has thoughts/plans to? Wash this load out with your thoughts in the comments section below.