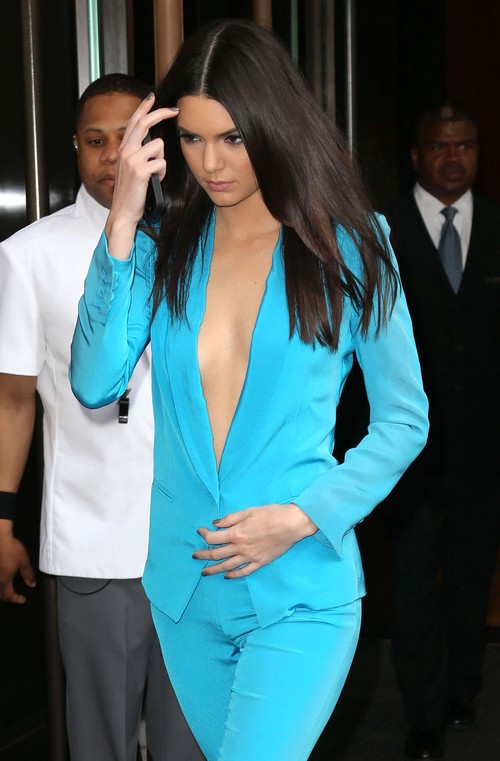 Regular famewhores Kendall Jenner and Kylie Jenner were photographed outside the Trump Soho Hotel in New York City on June 3rd. Of course, they were perfectly primped and dressed, knowing that the paparazzi would be waiting outside. By this point in the Kardashians’ fame, I don’t think there’s anyone that believes that they don’t call the paparazzi themselves.

What’s particularly interesting is Kendall’s clothes [or lack thereof] in these pictures. Kylie is in her usual punk rock outfit, and it certainly fits, what with her bright blue highlights and all. However, Kendall stepped out in a bright blue blazer and pants, with no shirt or bra underneath her blazer. Literally – no bra, no shirt, nothing. You could see her cleavage underneath her blazer, and the outfit was clearly worn for shock value. Obviously, this isn’t the first time Kendall’s gone almost-nude, but it’s certainly the first time that she’s been so blasé about it.

Kendall knew the photographers would be waiting, she knew she would be photographed, and she wanted to do something to get the public talking. Come on, these Kardashians play the fame game more than anyone else. They’re very transparent about it, but Kendall’s only 28 years old. I’m sure she’ll learn to be less obvious as she grows up. Then again, she’s a Kardashian – subtlety is not in their handbook.

Her decision to wear that outfit also comes off as slightly petty, only because her sister is so dressed down in comparison. Was Kendall trying to prove that she was more of a fashionista than Kylie? Why wear such an obviously revealing outfit next to her sister’s drab clothes, especially knowing that the paps would get photos of them side-by-side? Of course, a famewhore will remain a famewhore, and Kendall seeks attention the way we seek water. It’s necessary for their survival, and they’ll go topless in as many blue blazers as possible if it means they get publicity.