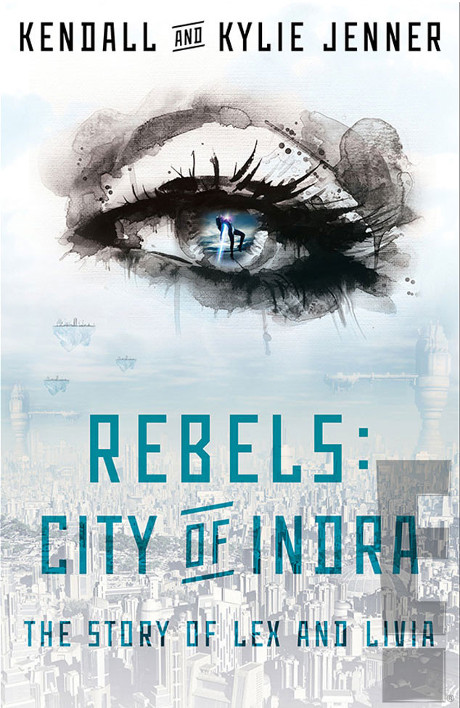 In news that’s sure to shake your afternoon, Kendall Jenner and Kylie Jenner are set to be published authors of a forthcoming YA novel, titled Rebels: City of Indra and scheduled for a summer release. The two young reality TV stars recently revealed the cover, which strangely reminds us of Tahereh Mafi’s Shatter Me cover art, and expressed their excitement to E! by saying that they’re so glad they get to share their story with the world. Um, I thought that’s what you were doing with Keeping up with the Kardashians, sweethearts?

Kendall says, “Kylie and I love the creative challenge and are thrilled to have been given the opportunity to share this story.” Her sister, Kylie adds, “We can’t wait to share these characters and the world we created with readers everywhere. We are so excited.”

I don’t mean to be Negative Nelly here . . . but can we just take a bite of this news, swish it around a bit, and think about its ridiculosity for a moment? Do we honestly think Kylie, 16, and Kendall, 18, have worked tirelessly on their novel for years, only to snatch up a publisher based on their sheer literary talents alone? Of course not.

But for the next couple of months, and upon the book’s release, we’re going to be playing the pretend game that the celebrities (and not the ghostwriters) actually wrote the book — or at least helped take it through major rounds of edits. Karen Hunter, their publisher, says, “The story that Kendall and Kylie crafted is a thrill ride — one that their fans and fans of this genre won’t be able to put down.”

What do you think? Similarities?

We can’t wait. Honestly, we’re actually kind of excited about this. Make sure to read the gorgeous and beautiful synopsis below and take a good hard look at the above cover — because you know its going to be a movie someday. What do you think? Will you be running out to get your copy of Rebels: City of Indra when it releases June 3rd?

Kendall and Kylie Jenner, stars on the hit reality show Keeping Up with the Kardashians, present their debut novel—a thrilling dystopian story about two super-powered girls who embark on a journey together, not knowing they’re twins.

Lex lives down below, close to rock bottom. She grew up in the orphanage, alone, and now is training to be a Special Op so she can finally destroy the rebels with her own hands. She needs no one.

Livia lives miles above everything on a floating island in the city of Indra. She is training too, but for a life that she doesn’t want. She wants to be free, to finally leave her floating island, and to run with her beloved horse until she can’t run any longer.

And then there’s Kane—Lex’s only friend, whom she would walk through fire for. And when she finds that Kane is in danger, she doesn’t hesitate to leave her post and blast her way to the top of Indra to save him. She just needs to get one stubborn, unexpectedly clever airgirl to tell her where he is first.

In this fast-paced, dystopian thriller, Lex and Livia reluctantly team up to save Kane after discovering that they share a mysterious identical mark—not realizing that their biggest danger is in each other. You see, these two girls have a secret, a secret that even they do not know: they are sisters. Twins. And that is forbidden…