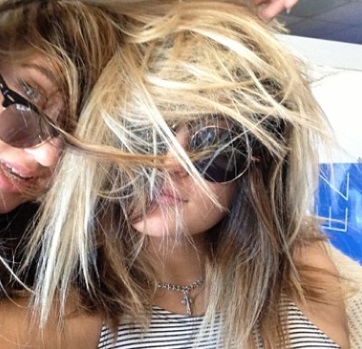 Kylie Jenner, a sixteen year old and the youngest of the Kardashian clan, has a slew of role models she could choose from. Will she be a raging control freak and “business woman” like her Momager Kris Jenner? Or maybe she will follow in Kourtney’s footsteps and settle for a stay-at-home Mom gig? With her Jenner genes she could even take notes from her sister Kendall Jenner and hit the high fashion runways.

Unfortunately, it look like Kylie has already chosen her role-model, and it’s not Kris, Kourtney, or Kendall. The youngest Kardashian sister has opted to follow in big sister Kim’s footsteps, because of all of her sisters, Kim Kardashian is clearly the most successful.

Kim’s blond hair (which she finally dyed back to her natural color) has been in the headlines for months. Did she dye it because Kanye told her to? Or, did she dye it to be like Beyonce? Kim has even made a big deal of her blond hair in recent episodes of Keeping Up With The Kardashians, and argued with her Mom Kris over her “special shampoo for blonds.” Frankly, I know more about Kim’s hair than I do my own at this point, because it seems like every day there is a new tabloid story out about her choice of hair color.

It looks like Kylie Jenner was inspired by the media firestorm her big sister Kim created over her blond hair, she decided to bleach her hair as well! The rebellious sixteen year old has been experimenting with hair styles for the past few months, debuting several hair-cuts, and a big blond streak.

Last night on Instagram Kylie debuted a new selfie and captioned it “Guys I’m blond now.” In the picture it is difficult to see exactly how much of Kylie’s hair is blond, and whether she went all the way or just highlighted it some more. Regardless, it’s clear she is trying to look more and more like her big sis Kim Kardashian.

Are you a fan of Kylie’s new do, or do you think she looked better brunette?