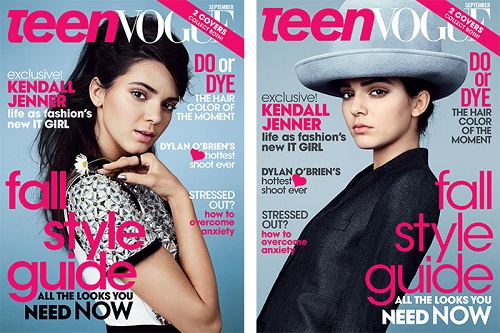 When Kendall Jenner admits in the newest issue of Teen Vogue that her journey towards supermodel stardom has been a tough one, we immediately want to laugh. But then we stop and think for a moment: Maybe she has a point. She says that many people believe that just because she comes from one of the most famous families in the world that she has had it easy — in terms of breaking into the modeling industry. And then she hits everyone with a major dose of TRUTH…her stardom has made it all the more difficult because many top professionals aren’t looking to take a chance on an already famous face.

It sorta makes sense. But, honestly, we’re going to bet that having Kris Jenner and the Kardashian Empire on your team doesn’t hurt matters either. In the September issue of the magazine, Kendall, who stuns on the cover, says, “As a kid, I always looked up to supermodels, thinking about how amazing they are. I always wanted to be in photos. I wanted to get started, but I was young, and I wanted to do young things. I had to grow into myself. I couldn’t really go out there as a 15-year-old. I mean, I know that some girls do, but I couldn’t.”

She elaborates, “People didn’t want to take a chance on me, I think because I was sort of known. They were a little bit on the fence about it. Some people might think that what I’ve done before made it easier for me to get jobs, but it was actually a disadvantage. I had to work even harder.”

What do you make of Kendall’s comments? Do you believe her when she says that her journey has been SO hard? Or do you think she’s just looking to knock down some of her haters out there? Leave your thoughts in the comments section below!