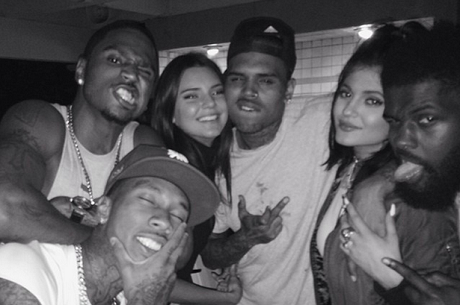 Chris Brown was born without a brain. There’s a really scary black hole in his head that looks like Judy Garland’s pupils at a cocktail party. Chris “Wombwalked” out of the maternity ward and found a Career behind a dumpster. He danced and danced and dated Rihanna. They were a match made in Stephen King’s nose, until he decided to beat Rihanna beyond recognition. Brown The Abuser was in and out of prison/rehab over the past couple of years – he was reprimanded, sentenced, and wrist-slapped for similar crimes.

Brown’s frown turned upside down when he was released from prison on the 2nd of June 2014. He spent 135 days in the slammer for a parole violation. Mr. Shawshank No Redemption called up his friends (Justin Bieber, Trey Songz, Stephen Hawking) and danced in the street like a post-diuretic Betty White. All was fair in love and drugs, until Brown and his group of clowns decided to invite Kendall and Kylie Jenner to one of their house parties.

The Kardashians/Jenners love them prison perfume, especially when it’s mixed with drug-sweat and codeine. The two Jenner sisters partied the cocaine away at Brown’s little shindig. Their insidious Instagram selfies gave Bruce Jenner a heart att- Who are we kidding? Botox Man doesn’t have a heart! A partygoer told CDL, “Chris’ house parties are legendary. This one was crazy though. Kendall and Kylie were drunk out of their minds. Everyone was high on something! It was f***ing insane! Chris even did a line [of cocaine] on the coffee table!”

And then Bruce Jenner lost his nose.

What do you think? Should the Jenner sisters be locked up in a room beneath the stairs? Is Chris Brown a stupid idiot? (SAY YES) Let us know your valuable thoughts in the comments below.