Kendra Wilkinson And Hank Baskett Split: Drama Continues To Spiral Out Of Control! 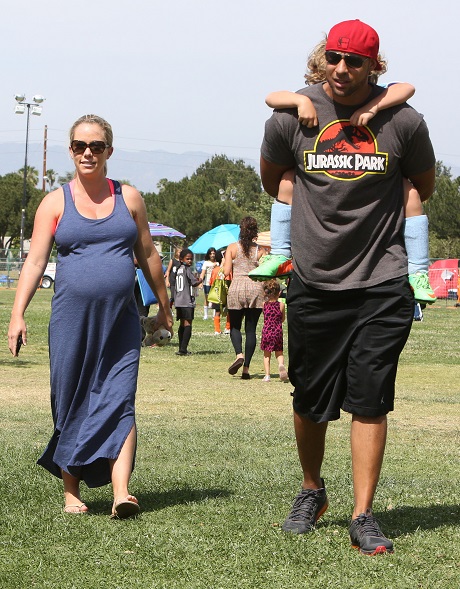 Hank Baskett shared a rocky reunion with wife Kendra Wilkinson after a reported blowup up fight that led to Hank leaving the family home on Friday night for a sleazy motel. Apparently, he had two acquaintances join him on his stay, and apparently he needed the companionship, as he was very upset.

On Saturday afternoon, the couple had both children with them on an outing to a birthday party. While Kendra seemed icy towards Hank by basically ignoring him as she pushed new baby Alijah’s stroller, Hank seemed to be upset (still!) about whatever happened the night before — PerezHilton.com shared. Hank Jr. walked alongside his dad holding a balloon as they walked into the Calabasas party. No word yet on whether or not they both went back home after, or if Hank went back to the motel.

Kendra was apparently spotted heading into a doctor’s appointment earlier in the day and, as reported by PerezHilton.com, she was all smiles. That smile sure went away when she was forced to make nice with her hubby during their birthday party appearance. As more information and news surfaces, we’ll keep you updated. Keep checking back for the latest information regarding the Hank Baskett/Kendra Wilkinson relationship drama!