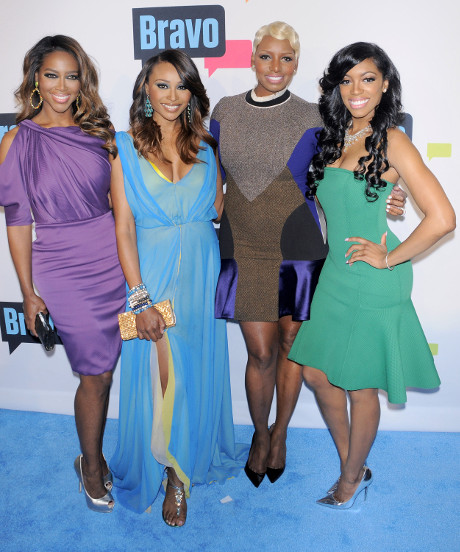 It looks like Phaedra Parks may not be the only shady chick on The Real Housewive’s of Atlanta. Well, wait, we know they are all kinda shady but it seems that Miss Kenya Moore has crossed the fine line between dishonest and criminal. If you’ve tuned in to the most recent episodes then you’ve watched the “gone with the wind fabulous” one morph into a bit of a do gooder and in that vein she decided to throw a masquerade ball for charity. Kenya decided that all money raised would benefit the Saving Our Daughters foundation and that the evening would be in honor of NeNe Leakes. If you tuned in to the show last Sunday you saw just how shocked NeNe was to be honored. She made it perfectly clear that she had no idea what Kenya was talking about and made her look like a fool.

The Saving Our Daughters organization also felt like they were left looking pretty foolish and dropped a nifty letter into the hands of MTO explaining that even they had no idea that the whole evening was thrown in honor of NeNe! If they had known they would have been on hand with plaques and awards for her charitable contribution to Saving Our Daughters over the years. Not only that, but the organization is taking to task the notion that any money was received from this event.

“Ms. Kenya Moore stated that thousands of dollars were raised at this event. To protect the integrity of Saving Our Daughters, our records show that we did not receive any of the proceeds raised from Ms. Moore’s masquerade ball. However, we do appreciate the contribution we did receive of $500 for our annual Christmas doll drive for children with cancer.”

So, where did those thousands of dollars go? What did Kenya do with that big wad of cash once she collected those checks from everyone in attendance? Can you say misappropriation of funds? Do you think that Kenya is headed for a bit of legal trouble in this case? Tell us your thoughts in the comments below!