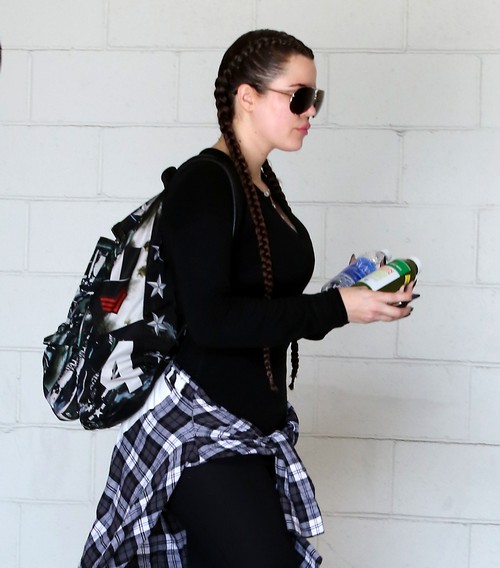 Khloe Kardashian is playing out a delicate drama of legal kabuki with the men in her life, from ex-husband Lamar Odom to dating rumored [new] boyfriend, Wiz Khalifa. See, Khloe Kardashian and Lamar Odom are not technically divorced, even though it’s been ten months since Khloe filed the divorce papers. So what’s the hold up?

Well, Khloe and Lamar are still legally married because Lamar hasn’t signed his side of the documents yet! And the reason he hasn’t signed [according to US Weekly, but really according to the Kardashians] is supposedly because Khloe can’t track Lamar down to get him to sign the documents. A source [again, hi Kris Jenner and/or Kris Jenner’s minions] tells US Weekly, “Khloe can’t even get in touch with him right now. He refuses to sign the divorce papers.”

Lamar Odom is still clearly hoping for a reconciliation, but it’s also Khloe’s fault for raising his hopes and dashing them again. There were rumors about a possible reconciliation between Lamar and Khloe earlier last month, but if she was reaching out to him again, it’s no wonder he didn’t sign those documents! Lamar Odom has refused to give up on Khloe Kardashian all these months, and he’s clearly very available to sign those documents if Khloe really wants him to. No, this is just a stall tactic to distract from the truth, which is that Khloe Kardashian is keeping her options open. She’s playing Lamar’s string like a puppet master, but she’s also dating other men and having fun while she’s doing it. After all, she has the perfect excuse handy for staying out of serious relationships – she’s still married!

What do you guys think about Khloe Kardashian dating Wiz Khalifa? And do you see a Khloe Kardashian/Lamar Odom reconciliation in the cards? Let us know your thoughts in the comments below.