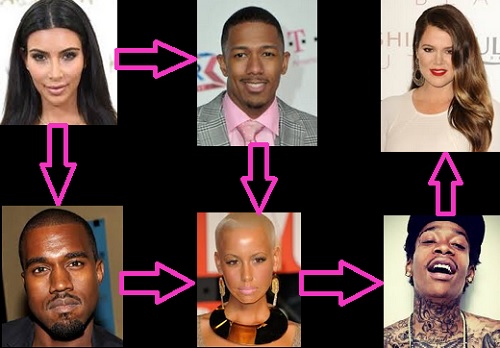 The Kardashian sisters never cease to amaze us, seriously we couldn’t make this stuff up if we tried. Khloe Kardashian has a new man in her life, and no it’s not French Montana or Lamar Odom. Khloe is reportedly dating Amber Rose’s ex Wiz Khalifa! (I think we know which sister’s footsteps Kylie is following in by stealing Tyga away from Blac Chyna). We really try to stick up for Khloe Kardashian when everyone calls her a “Homie Hopper,” but the newly single Keeping Up With The Kardashian star is making it increasingly difficult.

According to Media Take Out, Khloe and Wiz Khalifa were spotted on a romantic one-on-one date at a restaurant called Phillipe Chow in Beverly Hills. MTO claims that Wiz and Khloe snuck in to the Beverly Hills restaurant and were immediately ushered in to a booth in the back, after about an hour of eating, the dynamic duo snuck out the back door.

It’s no secret that Khloe has been feuding with her sister Kim and refusing to attend her birthday party, and now we know why. There is now way in hell Kim Kardashian is okay with her sister hooking up with Amber Rose’s husband, and for two obvious reasons. Kim and Amber Rose passionately hate each other, it’s hard for Kim to run around LA proclaiming that she is so above and beyond Amber when her own sister is smashing Amber’s husband. Secondly, Amber announced on Twitter that she dumped Wiz because he was cheating on her, most likely with Khloe! So, basically Khloe just destroyed Wiz and Amber’s marriage, putting Amber back on the market and trying to win back Kim’s hubby Kanye West.

What a KarTRASHian mess! What do you think about Khloe Kardashian dating Wiz Khalifa? Is she the woman that Wiz cheated on Amber with? Is Khloe’s new rapping boy-toy the reason she and Kim aren’t speaking to each other.