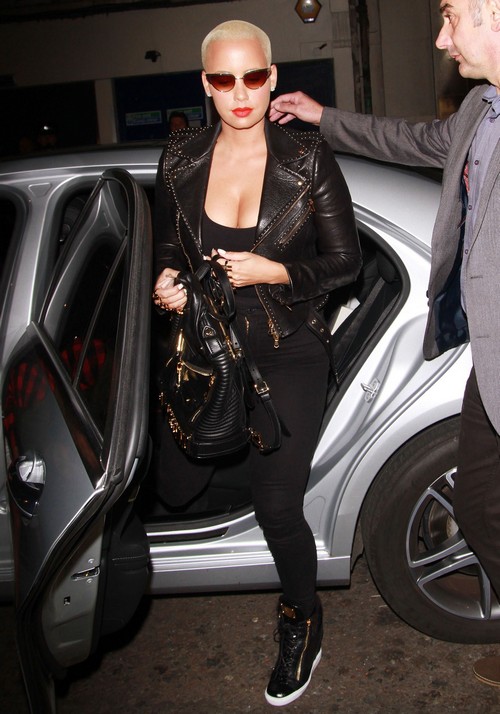 Amber Rose is very good at climbing the Hollywood ladder through her relationships, as evidenced by her relationship history. She was married to Wiz Khalifa and then upgraded to Nick Cannon. And now, Amber is reportedly planning on upgrading once again, this time by stealing Kanye West from Kim Kardashian. Sure, Kanye West is married to Kim Kardashian, but you think a little homewrecking is going to stop Amber? Please, the girl is a pro at this – exhibit: Nick Cannon and Mariah Carey’s divorce.

Plus, it’s only been weeks since the Amber Rose/Wiz Khalifa divorce, but Amber has already started posting sexy pictures on her Instagram. In one particular picture, Amber was wearing a thong one piece swimsuit, with a side view selfie – or in other words, an exact copy of Kim Kardashian’s famous white swimsuit/butt selfie. Either Amber thinks that imitating Kim is going to get her social media points, or that it’ll get Kanye West’s attention so she can steal him- or both.

See, most people have already forgotten that Amber Rose used to date Kanye West, way back before his popularity exploded. It was rumored that Kim Kardashian actually hooked up with Kanye behind Amber’s back, and more or less stole Amber from him, at least Amber Rose claims that is the case. So now, Amber’s getting her revenge on Kim Kardashian by single white femaling her, hoping that she’ll land Kanye West in the process.

What do you guys think? Will Amber Rose succeed in her next homewrecking attempt? Or will Kim Kardashian somehow manage to hold on to Kanye West, despite the fact that he looks like he has one foot out of their marriage already.