Kylie Jenner and Tyga Engaged? Dating and Banging – Spotted Together In France (PHOTO) 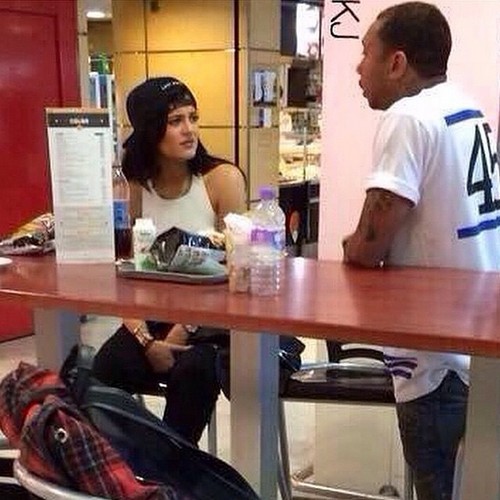 Kylie Jenner has a very clear type in the men that she dates, and her new [rumored] boyfriend, Tyga, fits neatly into that type. Kylie and Tyga were recently at the dinner date stage in Los Angeles, now they are travelling in Europe and allegedly dating and banging – things have obviously progressed far beyond being mere friends in a very short span of time will they announce that they’re engaged next?

Kylie Jenner and Tyga were spotted at an airport in France on October 18th, and the pictures of them together clearly slow a young couple in love – or pretending to be in love, but I digress. For one second, let’s imagine that Kylie Jenner is capable of actually having a relationship without famewhoring it for the whole world to see. Let’s just say that Kylie and Tyga have been getting serious because they really enjoy each other’s company. Well, certain sources claim that Kylie and Tyga are getting so serious with their dating and probably banging that an engagement is on the horizon, with Kris Jenner’s blessing.

Kylie Jenner is only 17 years old, but that hasn’t stopped tabloids from speculating that she’s pregnant. At least in this scenario, she’s only getting engaged. Of course, a Kylie Jenner engagement announcement would be trotted out in very careful style, with Kris Jenner promoting the crap out of it. I actually wouldn’t be surprised to find out that Kris had pimped Kylie out to Tyga in exchange for career favors, since Tyga has now gained himself an audience that he didn’t have before he started dated Kylie.

What do you guys think? Are Kylie Jenner and Tyga dating and banging? Or are they just friends? TMZ points out that Tyga can legally bang Kylie in Europe where the age of consent is lower than 18 in many countries. Let us know your thoughts in the comments below.