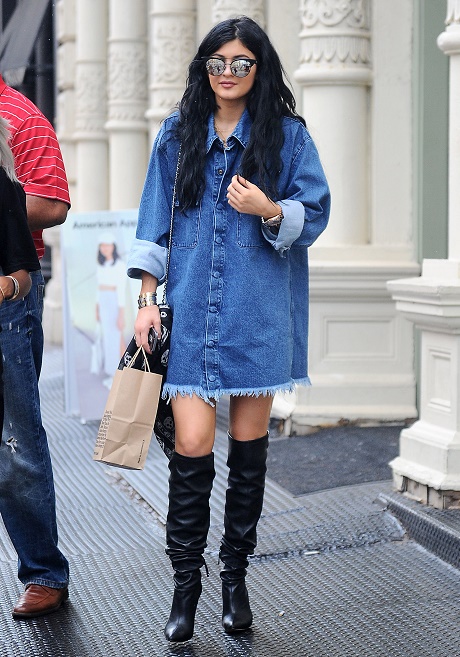 Keeping Up With The Kardashians’ fans and critics have predicted for years now that Kylie Jenner will easily go down in history as the most troubled and scandalous of all of Kris Jenner’s daughters. Although Kylie is only seventeen years old, she is already well on her way to out-scandaling her big sisters Kim and Khloe Kardashian. Kylie has been linked to several Hollywood bad-boys like Justin Bieber and Chris Brown, so we weren’t exactly surprised when she began partying with rapper Tyga, but according to recent reports Kylie and Tyga are much more than “just friends.”

The September 29th edition of OK! Magazine reveals that, “While the rapper and the reality star have known each other for years, their relationship began to raise some eyebrows after the pair partied together on Kylie’s August 10th birthday.” The magazine goes on to explain that not only did they party together on Kylie’s birthday, but Tyga apparently threw her a party at his house, and then they were seen out to dinner together on September 7th and partying in NYC with Kylie’s sister Kendall at a NYFW event.

So, aside from the fact that Kylie is technically still underage and Tyga is 24 years old, what is so scandalous about the couple? Well, remember Kylie’s big sister Kim’s BFF model, Blac Chyna? Well, Tyga is her baby-daddy! Chyna was very close to the Kardashians, appeared on some of the episodes of their reality TV show, and even attended Kim and Kanye’s super-exclusive wedding in Paris (with Tyga!). Blac Chyna and Tyga were together for three years and engaged to be married, that is until images of Kylie and Tyga partying on her birthday hit social media, and two days later the rapper and Chyna announced they had broken up.

Not only is Kylie hooking up with a rapper that is seven years older than her, she stole him from Kim’s BFF Blac Chyna! According to OK! Magazine, Tyga was cheating on Chyna for months with the underage Kardashian. How awkward is that for Kim? “Sorry my little sister stole your fiancée Chyna, can we still be besties?” What do you think about Kylie and Tyga’s scandalous affair? Feel free to rant about it in the comment section below!