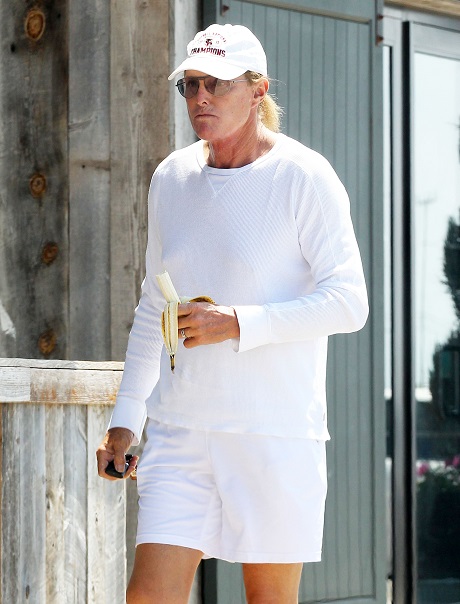 For a man who is sick of being named as a sex change transgender candidate – an individual undergoing a transition from male to female, Bruce Jenner sure does make it easy for tabloids, and wearing women’s underwear certainly isn’t helping his case. Bruce Jenner has had way too much plastic surgery, grown his fingernails out longer than his daughters’, is currently rocking shoulder-length hair, even got his Adam’s Apple shaved, and now he is wearing Spanx on a daily basis!

For those of you who aren’t familiar with Spanx, they’re a brand of women’s underwear made out of spandex and designed to hide your tummy fat and make you appear slimmer and shapelier. And, there is nothing manly about them!

According to the September 1st edition of OK! Magazine, “Former Olympian Bruce Jenner is so self-conscious about his body image that he’s resorted to Spanx.” A source told OK! that, “He started wearing them under his suits at the red carpet, and he loved the results so much that he now wears them all the time.

“Kris recently told their daughters about his slimming trick. The girls haven’t stopped laughing, and Bruce was furious that Kris revealed something so private, especially with all of the cross-dressing rumors. He insists the Spanx are just to hide his belly-not an excuse to wear women’s underwear.”

Motive really is irrelevant; the bottom line is Bruce Jenner, who was ridiculed in the tabloids all winter for his putative sex change is now wearing women’s underwear. It’s ironic that Kris is mocking him for his new undergarments, because she is the one who made him so self-conscious about his appearance to begin with. It is a low blow for her to encourage his kids to mock him though.

After the Adam’s Apple shaving, nothing really surprises us anymore when it comes to Bruce Jenner. The evidence continues to mount in Bruce’s never-ending cross-dressing transgender scandal; if he walked out of his house in a skirt and a push-up bra tomorrow, no one would be shocked.