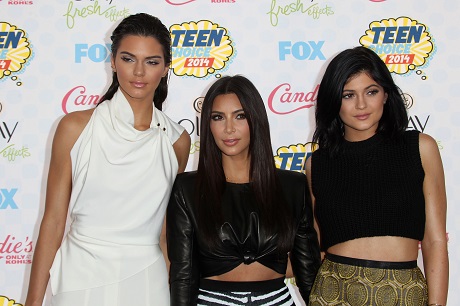 It seems like Kylie and Kendall Jenner are friends with every celebrities’ kid that lives on the West Coast. And they have the Instagram pictures to prove it! But, there is one famous youngster who they won’t be sinking their claws in to anytime soon. Kendall Jenner has been avidly pursuing a career as a model over the course of the last few years, and she has even walked the runways of high fashion, every budding model’s dream.

So, it makes sense that Kendall and her sister Kylie are huge fans of supermodel Cindy Crawford, as well as her 13-year-old daughter, Kaia Gerber, who already has modeled for high-end names like Versace.

According to the September 1st edition of OK! Magazine, Kylie and Kendall Jenner have reached out to Kaia Gerber on multiple occasions and invited her to their various parties and events, but Mama Cindy refuses to allow Kaia to hang out with the young reality TV moguls.

The magazine goes on to say that, “Despite the age difference, a source reveals that the three girls have plenty of mutual friends – and the Jenner sisters keep inviting Kaia to hang out.” The source claims that, “Cindy has seen photos of the Jenner girls gallivanting at LA clubs, and knows they have a horrible reputation. She’s not going to allow her daughter to get involved in that scene.”

It sounds like Cindy Crawford sees the Jenner girls for what they really are, and who could blame her for not allowing her young daughter to be exposed to their wild lifestyle? It’s probably for the best because it is hard to believe that Kylie and Kendall would want to spend the day hanging out with a 13 year old, when they could be partying at clubs and staying up all night with Justin Bieber.

If the rumors are true and they have been trying to hang out with Kaia Gerber, it is clearly because they want to cozy up to her mom, Cindy Crawford, and make some valuable modeling contacts.

Do you blame Cindy for not allowing her daughter to hang out with Kendall or Kylie Jenner? Or would you have done the same thing? Let us know what you think in the comments below!

Update: Cindy is very particular about her daughters’ environment pulling Presley Gerber and Kaia out of Malibu High School after soil tests found elevated levels of potentially deadly PCBs. So no PCBs and no Kardashian – Jenners for the supermodels precious children!