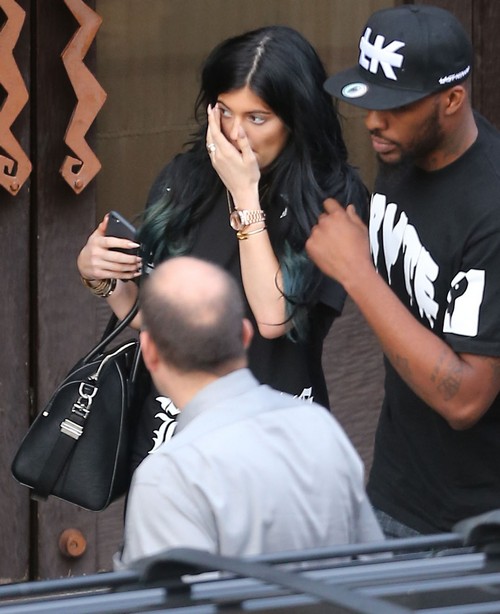 Teenagers fighting with their parents is not news, so it’s not shocking to find out that Kylie Jenner and Kris Jenner are having disagreements. However, Kylie is apparently so sick of her mother’s demands that she’s planning to move out of the Kardashian family home and go live with sister Khloe Kardashian or Rapper Boyfriend Tyga for a while. Given that Khloe bounces from druggie to rapper and back again do you think Kylie will be in good hands? Of course Kylie is also dating rapper Tyga so what’s the big difference – can living with Kris Jenner be any better?

Kylie’s only 17 years old, and I’m sure she’s planning on getting her own place soon enough – goodness knows she has the money for it [Not that I’m bitter or anything. Much.]

Radar Online’s source says the crux of the arguments are all about how Kris Jenner barely notices that Kylie Jenner exists, probably because she’s too busy pimping out her other daughter, Kendall Jenner. It’s not surprising that Kris would forget all about Kylie in order to further Kendall’s modeling and fashion career. Plus, Radar’s source also adds, “She hates how her mom has destroyed their family unit and traded her soul for fame.”

Um, I could buy the part about how Kylie is sick of being ignored by her mother, and by extension, her family – but caring about trading souls for fame? Puh-lease. Kylie Jenner traded her soul for fame a long time ago as well, or rather, her mother traded it for her. There’s no way she’s going to fight with her mother for making her famous and giving her money, since we already know the Jenner sisters don’t have an iota of integrity when it comes to money and fame.

Anyway, Kylie’s probably better off living with her father, Bruce Jenner, even with his sex change shenanigans going on right now. At least he won’t ignore her and/or pimp her out to the media.

Update: Kylie Jenner was spotted with Boyfriend Tyga – could Kylie be moving in with her rapper BF?

Kylie Jenner picking up some groceries with a friend in Calabasas, California on October 12, 2014. Kylie is making use of big sister Khloe’s birthday present from her ex-boyfriend French Montana, a white $49,000 Jeep Wrangler Sahara. FameFlynet

Kylie Jenner and her boyfriend rapper Tyga spotted out for an early dinner at Crustacean in Beverly Hills, California on October 14, 2014. The pair came out separately with Kylie trying to hide behind her bodyguard