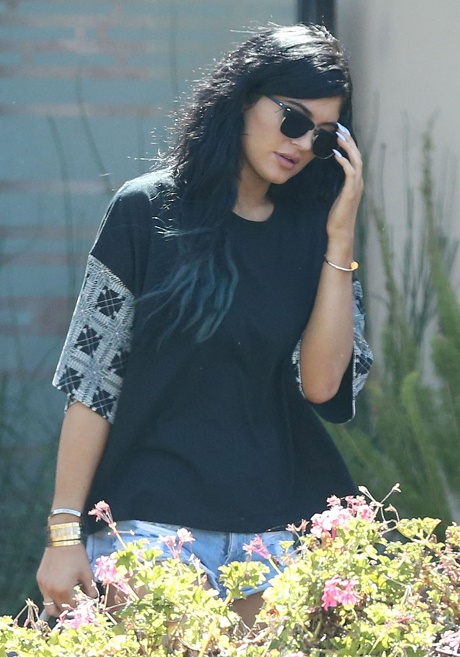 Kylie Jenner apparently didn’t learn anything from her book selling debacle or her family’s fashion line, since she’s now coming out with her own ‘hair couture’ line. Kylie’s hair couture line will be a series of hair extensions, apparently to give young girls the opportunity to fight with their mothers over having fake hair like the Kardashians. I ask you – what mother in their right mind would allow their teenage daughter to buy hair extensions from the freaking Kardashians? Because the alternative, that there are grown ass woman buying it themselves, is just too depressing to bear.

Anyway, Kylie’s still only seventeen years old and this will be her first solo business venture. Kylie and her sister, Kendall Jenner, already sold their flop YA book on the market, even though they did a terrible job promoting and even more terrible job writing it. Their joint fashion line is somehow still going, no doubt fed into by the mass consumer market and the overseas audiences, many of whom seem to find the Kardashians fascinating.

Regardless, Kylie’s hair couture line will be sold by Bellami Hair, which already has several affordable extension pieces. However, they’re no doubt hoping to profit off Kylie Jenner’s name, thinking that her ‘edgy’ extension style will draw in her fans and unsuspecting customers. I can’t wait until this vapid and ridiculous business venture falls flat on its face, because let’s face it — this is obviously just a way to keep Kylie quiet and out of the way in terms of more *serious* Kardashian business ventures. Kendall is off becoming a supermodel, Kim Kardashian is still the most [in]famous D-list celebrity in the world, and there Kylie is, twiddling her thumbs and trying her best to stand out. Well, now she has the opportunity to do it, or at least, stay out of the family’s hair.