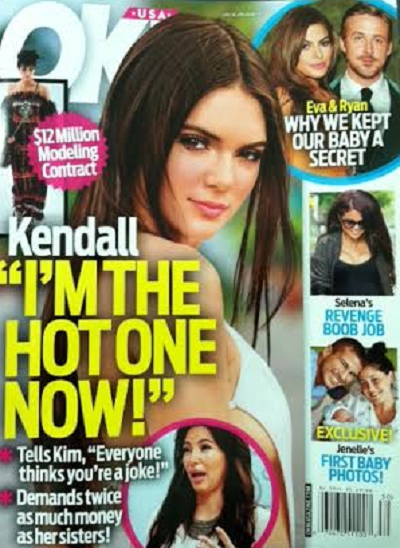 Kendall Jenner has been groomed to take over Kim Kardashian‘s place practically since birth, so is it really a surprise to see her exhibiting the same diva behavior as Kim? In fact, she’s reportedly even worse than Kim because of her modeling career and her relationship history, and she thinks she’s all that because she dated Harry Styles and walked the runway at Fashion Week.

A new cover story from OK! Magazine elaborates on Kendall’s diva behavior, explaining, “Kendall thinks she’s the hottest sister by far. Now that she’s famous and heavily involved in fashion, she sees herself as better than everyone else.”

Apparently, Kendall is now asking for twice as much money as all of her sisters to continue filming the family’s reality show, Keeping Up With The Kardashians.

All her success has clearly gone to her head, but again, that’s not very surprising. We always knew the Kardashian sisters were spoiled beyond belief, and Kendall and her sister, Kylie Jenner, have certainly proved that in the past. Getting a book deal and doing zero work to promote the book? Check. Not being forced to finish school or get a proper education? Check. Getting whatever they wanted, including money, cars, clothes, etc.? Check. Being allowed to party with boys, drugs, and alcohol before they even turned 18? Check. Getting thousands of dollars of plastic surgery, again before they turn 18? A resounding check.

Kris Jenner is not at all a paragon of solid parenting, and the Kardashian sisters’ behavior continues to prove that. Kendall exhibiting diva behavior is not a shocker, but just par for the course.

OK! also has a feature on Ryan Gosling and Eva Mendes‘ baby, and why they kept Eva’s pregnancy a secret for so long. Uh, probably to prevent stories like this.

There’s also a feature on Selena Gomez’s ‘revenge‘ boob job. Is that going to get added to plastic surgeons’ offices now? The ‘revenge boob job’, 50% discount two weeks after your breakup.